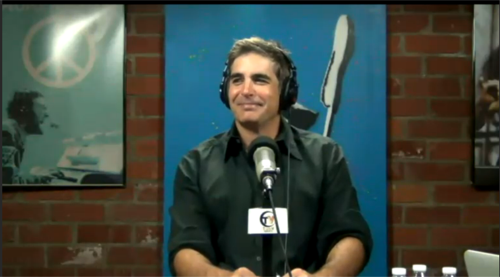 “Days of Our Lives” Galen Gering [Rafe Hernandez] recently sat down for an interview on Soap Box. Galen talked about his career, fatherhood and the secret to a happy marriage with hosts Martha Madison [Belle Black, “DOOL”] and Lilly Melgar [Janice Ramos, “The Bay”, Lily Corinthos, “GH”].

Galen seemed to have the most fun talking about being the father of two boys. He explained, “My wife and are really love when we have separate one-on-one time with the kids. When she has one and I have one you can really get that special one-on-one time. Because, when they’re together, they just talk about wieners all the time.”

At this point Galen had Lilly and Martha roaring with laughter. Martha asked Galen how being a father changed him. The actor explained that being a dad has made him be a little less selfish, but he still needs his “me time.” However, Galen loves spending time with his boys who are nine-years-old and seven-years-old.

Talk turned to marriage and how to balance family time with friend time and me time. Galen has been married to his wife Jenna for 16 years. “What’s your secret to a healthy, long marriage,” Martha asked. Galen’s answer was, “We don’t really fight that much,” the actor said with a straight face. Lilly asked how the couple manages not to fight. “Very carefully,” Galen answered. The couple shares the same values and agree on most stuff – their not only lovers, they’re best friends.

Perhaps the funniest part of the interview on TradioV was when the hostesses and Galen talked about his time on the NBC soap opera “Passions.” Galen portrayed Luis Lopez-Fitzgerald from 1999 until the daytime drama’s cancellation in 2008.

One of Galen’s co-stars was impossible to work with and to this day it seems the actor must have nightmares about it. Galen had to work with an orangutan for years, and that was the absolute weirdest storyline. You have to listen to the interview on TradioV to hear Galen explain it in detail.

The crazy co-star was smart and strong and nasty and eventually TPTB had to retire it. Galen told a story of a time the primate squeezed ketchup and mustard all over the place and once threw a vase of flowers on the floor. But when they called “action” it was all set to roll.

Check out the rest of “Days of Our Lives” Galen Gering’s interview on TradioV’s show Soap Box with Lilly & Martha.