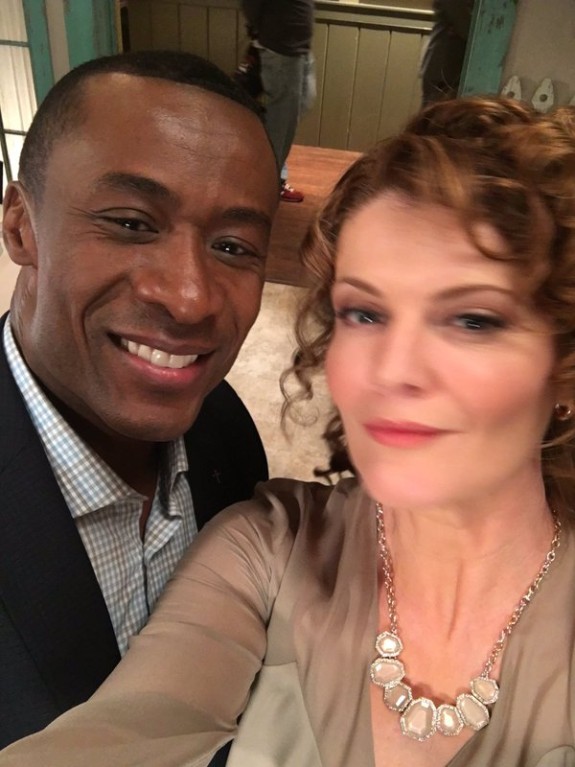 There is no other information yet as to what character Blakemore will portray or even if he will guest-star, have a recurring role or is on contract. All fans have to go on at this point is the photo of Rebecca and Sean on Twitter.

Whatever character Sean will portray the actor would definitely be a fantastic romantic interest for any of the ladies. Evelyn Powell has an eye for handsome men, could Blakemore be another one of Evelyn’s conquests?

Not only will “GH” fans see Sean on “Devious Maids” the actor has a role on the Amazon television series “Bosch” as Captain John Felton. Another project Sean Blakemore has been working on is the television movie “Cursed Angel” in which he stars as John Washington. Sean has also guest-starred on “CSI: Cyber” as Director Silver.

“General Hospital” fans are waiting for Hayden Barnes (Rebecca Budig] to confess that it wasn’t Shawn Butler who shot her. It’s time for Shawn to be released from prison and return to Port Charles and romance Jordan Ashford [Vinessa Antoine] again.

Sean Blakemore has certainly been busy during his time away from “GH.” Hopefully the actor – and the character he portrays – won’t be gone much longer. Viewers miss Shawn and Jordan as a couple and it’s time to reunite them.