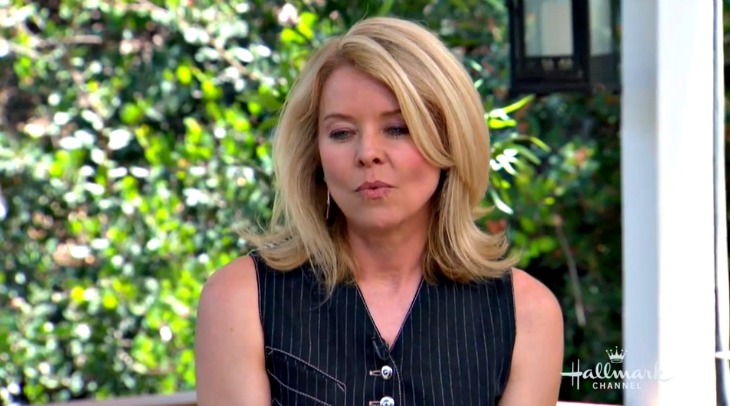 “General Hospital” Kristina Wagner [Felicia Scorpio] sat down with the Hallmark Channel “Home & Family” hosts Mark Steines and Cristina Ferrare. The interview aired on Thursday, March 17 at 10am with an encore presentation at noon the same day and then again on Friday, March 18 at 10am and noon.

Kristina portrays Nora Avery on the Hallmark Channel original series and ex-husband Jack Wagner portrays her on-screen estranged husband Bill Avery. During the interview Kristina talked about co-parenting with Jack – the couple has two sons – Peter who is now 24 and Harrison who is now 20. The family worked together on recovery with outside help in order to resolve years of anger and resentment.

The actress’s advice for families going through divorce and/or experiencing anger and resentment, pain and frustration to get professional therapy. “Be willing to work on your feelings, learn to access what it is you feel.”

Kristina was quick to correct host Mark Steines when he said Kristina and Jack are back together. “Jack and I have separate lives. But they are good ones,” the actress giggled.

Things were not good between Kristina and Jack for a long time and it was difficult for her to work with him when Jack returned for the “General Hospital” 50th anniversary. But they ex-couple is now in a good place and Kristina enjoys working with Jack on location in Vancouver.

Viewers may be surprised -Kristina Wagner and Jack Wagner have amazing on-screen chemistry. “GH” fans can watch “When Calls the Heart” Saturdays at 8pm on the Hallmark Channel.