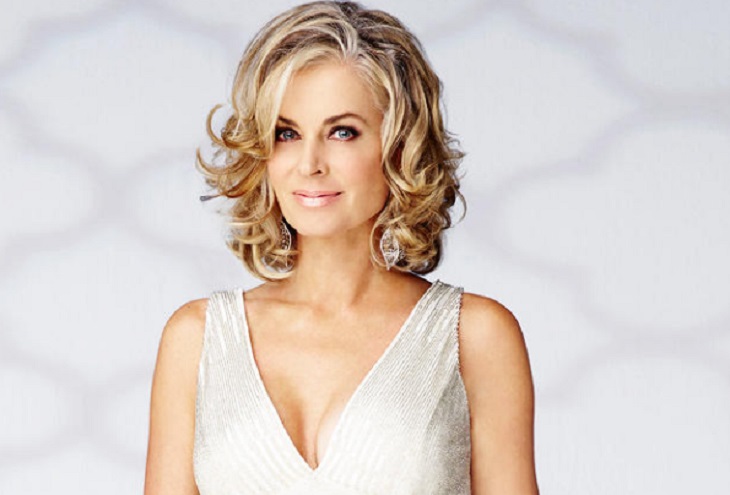 ‘The Young and the Restless’ Eileen Davidson [Ashley Abbott] added reality television star to her resume when she accepted Bravo’s offer to join ‘The Real Housewives of Beverly Hills.’

When it comes to family, Eileen is an average mom raising her son Jesse with husband Vincent Van Patten. It can get pretty crazy for the actress.

The morning usually starts with taking Jesse to school, heading off somewhere to pick-up things for her son, a stop at the grocery store and then home to make dinner.

There is usually a Pilates class in there somewhere, maybe a photo shoot or an interview. And of course Eileen needs to learn her script for the next days ‘The Young and the Restless’ episode whenever she’s on the call sheet.

Speaking about ‘Y&R’ Eileen gave high praise to co-star Michael E. Knight. “I love working with him. I’m interested to see where their relationship goes,” Eileen dished. Interestingly enough Eileen loves working with Mishael Morgan [Hilary Hamilton], calling her one of the sweetest people on the planet.

Eileen’s co-stars on ‘The Real Housewives of Beverly Hills’ may not be so sweet. Eileen spent then entire season butting heads with Lisa Vanderpump. The soap star’s biggest complaint about the original ‘RHOBH’ cast member is that Lisa doesn’t own up to the things that she does. “I’m a very honest person and that’s the way I wanted to be on screen. There were shenanigans and it’s not easy calling people out on their stuff.”

Surprisingly Eileen did bond with Kyle Richards even though Kyle defers to Lisa in order to keep the peace. Eileen revealed that she adores Kyle and that she is one of the funniest people she has ever met.

Even though Eileen Davidson clashed with long-time friend Lisa Rinna [Billie Reed, ‘Days of Our Lives’] their friendship didn’t suffer. Eileen does feel she understands Lisa a little more than she did before the actresses joined the Bravo reality show.

One of the most surprising things ‘Y&R’ fans learned about Eileen was that she had been involved in two abusive relationships. The actress was extremely nervous about talking about something so personal on television. “Disclosing something so private is always a risk because you don’t know how it’s going to be perceived,” Eileen explained in the interview.

Reality television is very different from acting on a soap opera. Eileen found out that people can be quite cruel and leaned to just block the haters on social media.

Will Eileen Davidson return for a third season of ‘The Real Housewives of Beverly Hills’? Nothing is a sure thing, fans will need to wait and see what Bravo has planned. But it doesn’t look as if Ashley Abbott is going anywhere anytime soon on ‘Y&R.’