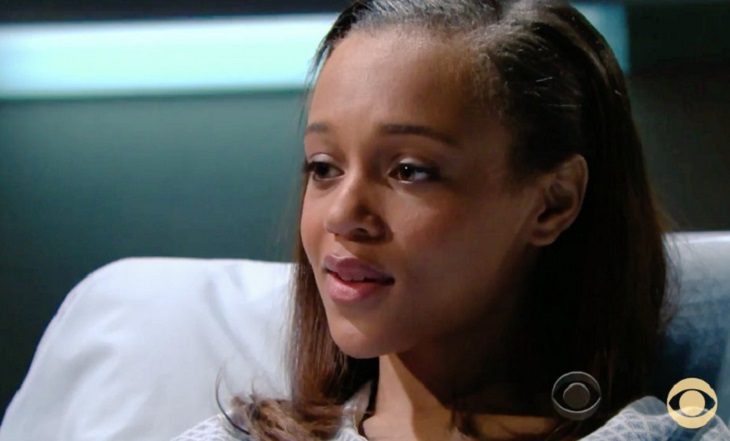 ‘The Bold And The Beautiful’ star Reign Edwards is not just a talented actress on the CBS soap opera, she’s also a very talented singer.  When Reign Edwards isn’t playing Nicole Avant on ‘B&B,’ she uses her spare time to hit the studio and record music and cover popular songs in videos.

This week’s all new ‘The Bold And The Beautiful’ weekly spoiler video shows Nicole Avant in labor, giving birth to the surrogate child she carried for her sister Maya Avant (Karla Mosley) and her husband Rick Forrester (Jacob Young). Of course the birth of the ‘B&B‘ baby is a joyous moment for the Avants and Forresters and the music playing in the background of the video montage is a song sang by Reign Edwards!

The song featured on the new ‘B&B‘ promo is called ‘These Are The Moments.‘  And, it was written and performed by Reign Edwards herself.  Of course, Reign had some assistance from ‘The Bold And The Beautiful‘ music team and Bradley Bell.

‘B&B’ fans were shocked a few months ago when a video of Reign Edwards singing the National Anthem at CBS Mayhem went viral – no one realized that Reign Edwards had such a set of pipes!  Naturally, fans of the CBS soap opera began clamoring for TPTB to use Reign’s singing talents on an upcoming episode of ‘B&B‘ – and it looks like they took those requests to heart.

Check out Reign Edwards new song ‘These Are The Moments’ in the ‘B&B‘ weekly spoiler video below, and let us know what you think in the comment section!  If Reign Edwards released an album, would you purchase it?

Be sure to tune into #BoldAndBeautiful this week! Nicole gives birth and a bunch of other things r goin dwn!!😱😏💙😁 pic.twitter.com/dGqNfpXCWh

The Bold And The Beautiful (B&B) Spoilers: Diamond White Shares News Of Her New…

The Young And The Restless (Y&R) Spoilers: Adam & Sharon Memories Hint at…