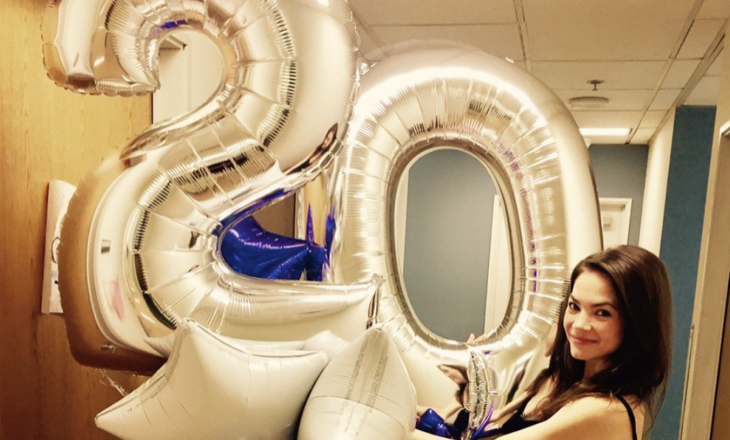 It’s without a doubt that real-life General Hospital couple Rebecca Herbst (Elizabeth Webber) and Michael Saucedo (Juan Santiago) have their hands full at home. As a matter of fact, Rebecca couldn’t help but notice that she has been outnumbered in the parent versus child and dog ratio! The actress is best known for her role as Elizabeth in Port Charles while Michael was once known as Juan.

Speaking to CBS Soaps in Depth in an interview, Rebecca admits that she and Michael have a very full house and she’s done filling it. At least, that’s how she feels right now.

She said, “Michael loves dogs and it seemed that every time I got pregnant, he wanted a dog. I get pregnant, and I need to get a dog! The last two are itty bitty guys and they were actually supposed to be my baby fix and pacify the urge. They were supposed to be my new babies. But it didn’t work, so we had Emerson.”

And to the man who loves us every single day.Thank you for giving me such an incredible weekend @MichaelSaucedo #HappyMothersDay #Blessed ❤️ pic.twitter.com/saxAOjCv1Y

And it seems like Rebecca wasn’t kidding, either. Michael has so far managed to bring home quite a few pups: Ryder, Kipper, Lulu, and Bentley. In addition to the dogs, the gorgeous couple also has three children: Ethan, 16, Ella, 14, and Emerson, 8.

Rebecca says that with so many children and pets under one roof, she’s done! She declared, “there are no more babies coming!”

In the meantime, General Hospital airs weekdays on the ABC network. Check your local listings for times. Let us know what you think by leaving us a line with your thoughts in our comments section below. And as always, don’t forget to check back with Hollywood Hiccups for all the latest news, updates and spoilers on General Hospital and all of your favorite daytime television shows right here!