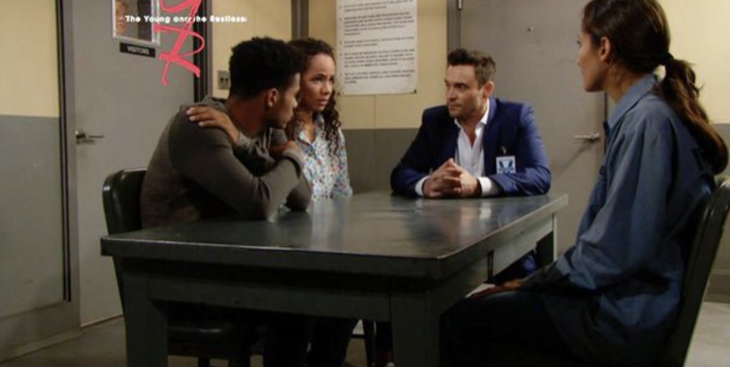 Lily (Christel Khalil) sits behind bars on ‘The Young and the Restless’. Khalil’s move to recurring status has sparked a storyline that is otherwise hard to digest. Seeing a wife and mother jailed for an unintended car accident has wrecked a family and legions of fans who love them.

The Ashby family has been deeply impacted by Lily’s sentence. While not the feared-max of twenty years, the handful of weeks she’s spent at Walworth has felt like months. However, as Cane (Daniel Goddard), Mattie (Lexie Stevenson), Charlie (Noah Alexander Gerry), and ‘Lane’ fans know, Lily isn’t scheduled to be released until next September.

At least Devon (Bryton James) has come around. Y&R’s writing staff turned his thoughts around quickly, in part because Khalil won’t be seen on screen that often. So, they allowed this brother and sister to begin the heal process.

LOVE Y&R? SUBSCRIBE TO OUR THE YOUNG & THE RESTLESS NEWSLETTER, HERE!

However, Lily is understandably having a hard time adjusting to this forced, new life.

Cane and the twins are hopefully going to have other experiences while Lily is incarcerated. ‘Lane’ fans are surely wondering what the involved actors likely thought when Khalil’s status change was announced. Six weeks in advance recording schedules have allowed Goddard, Stevenson, and Gerry to have a glimpse at the future. Their supporters will learn as the fall plays out if the Ashby family will be shown in scenes behind the Walworth visitor’s room.

The unexpected shift away from Lily and Cane’s love story creates various options. Baby Sam could be SORAS’d a bit, thereby making the child Cane had with Juliet (Laur Allen) a more prominent part of the show. The twins school lives could be shown more in depth, as various younger characters also experienced in Y&R days gone by.

As for Cane, he’ll surely remain loyal to Lily. The show wouldn’t write him into contact with a woman who would grow into a love interest, or even become Lily’s replacement, right?

Considering all that Cane and Lily went through to restore their marriage, warm-hearted soap fans want to see this couple stay together. Then, in time, it would also be good if Khalil returns to regular status and Lily returns to her family as well.