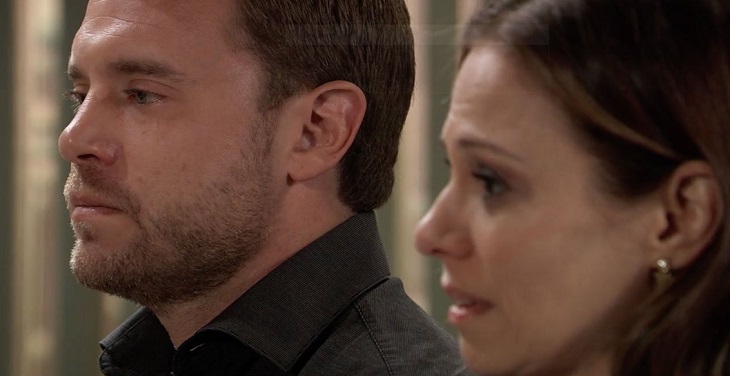 General Hospital (GH) spoilers for Wednesday, September 26, 2018 reveal confrontations, and questions as family members avoid each other. Answers are demanded as a very sick young man goes missing. GH fans will not want to miss out on Wednesday’s episode!.

GH sources tease that Anna Devane (Finola Hughes) confronts Dr. Hamilton Finn (Michael Easton) when she sees he has been reviewing his father, Gregory Chase (James Read) medical charts; showing he is more interested in his father’s case than he has let on. Will Finn agree to treat his estranged father?

Brad Cooper (Parry Shen) is desperate, meets with father-in-law, Julian Jerome (William deVry) concerned that their search for answers from Wiley’s birth mother is going to be the end of the charade and his marriage to Dr. Lucas Jones (Ryan Carnes), when they learn their baby is actually Michael Corinthos (Chad Duell) and Nelle Benson’s (Chloe Lanier) son, Jonah.

General Hospital spoilers indicate Kristina Corinthos (Lexi Ainsworth) still isn’t ready to cope with her family, asking sister, Sam McCall (Kelly Monaco) if the “firing squad” has left yet? No one is pleased she is working at Charlie’s Pub and especially that ran back into the gas filled pub to cover up for her grandpa, Mike Corbin (Max Gail), but how much trouble is the young mob princess really in?

Josslyn Jacks (Eden McCoy) demands answers from Cameron Spencer (William Lipton), and just like her mom, she doesn’t beat around the bush; telling him to just say what he is trying to say. Will Cam tell her what he knows about Oscar’s health?

GH’s Detective Harrison Chase (Josh Swickard) meets with Drew Cain (Billy Miller) and Dr. Kim Nero (Tamara Braun) asking them if they can think of anyone Oscar Nero (Garren Stitt) might reach out to. Meanwhile, Oscar is seen sitting with his Uncle Jason Morgan (Steve Burton) saying if he doesn’t tell anyone he is going to explode! How will Jason cope with his nephew’s revelation?

Be sure to tune into ABC’s General Hospital (GH) on Wednesday, September 26, 2018 to catch up on all these stories and so much more.