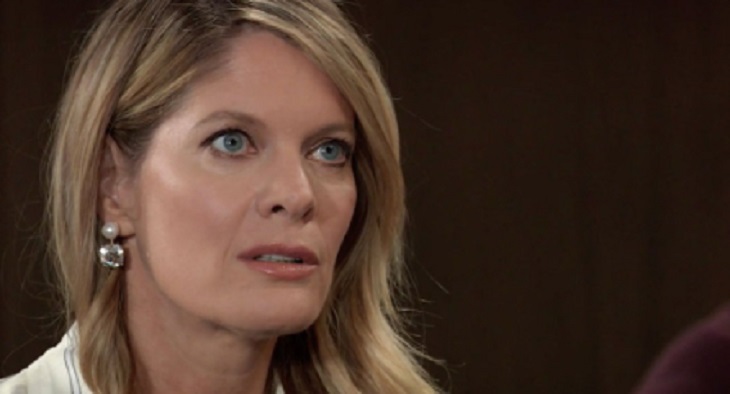 General Hospital (GH) spoilers for Thursday, October 4, 2018 reveal tense moments for one family while another shares a tender reunion. Secrets are shared as another places herself in danger. Reassurances are needed and another steps too far. Thursday’s episode is one GH fans will not want to miss!

GH spoiler sources tease that Gregory Chase (James Read) is at the hospital being examined by Dr. Hamilton Finn (Michael Easton) while Detective Harrison Chase (Josh Swickard) watches by the door. In spite of his deep hatred for his father, Gregory knows his son, Finn will treat him because the one things Finn hates more than him is failure!

Dr. Griffin Munro (Matt Cohen) wants reassurances, asking Peter August (Wes Ramsey) if he ever found peace. Peter is unable to put him at ease, telling him, “No!”General Hospital spoilers show Nina Reeves (Michelle Stafford) is unable to hide the truth from Maxie Jones (Kirsten Storms) and shows her Sasha Gilmore’s (Sofia Mattsson) photo to skeptical Maxie, revealing that Sasha is her biological daughter. Will Maxie believe her, once she explains everything PI Curtis Ashford (Donnell Turner) has told her?

Drew and Kim lean on Monica for support handling Oscar’s case. Might she be able to offer a little hope? A brand-new #GH starts RIGHT NOW on ABC! #GH pic.twitter.com/8TwyJfXbvs

Felicia Scorpio (Kristina Wagner) has inadvertently put herself directly in harm’s way, when she goes to GH and asks to meet with Dr. Kevin Collins (Jon Lindstrom), saying they can reveal the gruesome truth about his evil twin brother, Ryan Chamberlain. She is completely unaware she is speaking to Ryan himself and he has swapped places with Kevin. Will she be able to survive another round with Ryan?

GH’s Sam McCall (Kelly Monaco) pleasantly surprises Danny (T.K. Weaver) by having his dad, Jason Morgan (Steve Burton) inside the apartment when he gets home from school. He races into Jason’s arms, thrilled to see him.

It’s clear Ava Jerome (Maura West) makes a grave mistake when she visits Carly Corinthos (Laura Wright) telling her, “We’re even then, eh?” Carly orders her to, “Get the hell out of my house!” It looks like Ava is hell bent on revenge and Carly isn’t having any of it. How will Sonny (Maurice Benard) react to what Ava is doing to his family this time?

Be sure to tune into ABC’s General Hospital (GH) on Thursday, October 4, 2018 to catch up on all these stories and so much more. Check Hollywood Hiccups often for updates, news, rumors and spoilers!