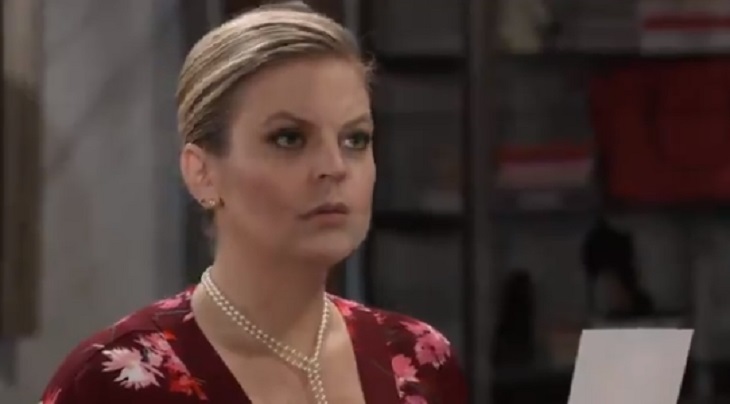 General Hospital (GH) spoilers for Friday, October 5, 2018 reveal love is in the air. Many citizens of Port Charles want answers. Confrontations happen as others are placed in difficult situations. Children need explanations as much as their parents. GH fans will not want to miss out on Friday’s episode!

GH sources tease that Dr. Griffin Munro (Matt Cohen) finally gives in to his desires and agrees with Kiki Jerome (Hayley Erin) that there is nothing to stop them from seeing where their newfound romance could go; little do they know that Ava Jerome (Maura West) is a scorn lover desperate on revenge.

Maxie Jones (Kirsten Storms) confronts Peter August (Wes Ramsey) and demands to know why it seems like he is avoiding her. At General Hospital, a young Aiden Spencer (Jason David) is questioned by his mother, Elizabeth Webber (Rebecca Herbst), while a concerned Franco Baldwin (Roger Howarth) looks on. She wants to know if something happened at school that day that might have made him upset.

A frustrated and confused Josslyn Jacks (Eden McCoy) puts Cameron Spencer (William Lipton) in an awkward position, as she is positive that her break up with Oscar Nero (Garren Stitt) is not real. Will Cam tell her what is really going on?

Meanwhile, a rebellious and angry Oscar informs his parents, Dr. Kim Nero (Tamara Braun) and Drew Cain (Billy Miller) that he doesn’t want to go back to school!

General Hospital spoilers reveal Danny Morgan (T.K.Weaver) continues to ask his father, Jason Morgan (Steve Burton) if he loves his mother, Sam McCall (Kelly Monaco) and if she still loves his dad. Sam overhears the conversation as viewers of the ABC soap opera wonder how Jason will respond to the youngster.

Be sure to tune into ABC’s General Hospital on Friday, October 5, 2018 to catch up on all these exciting stories and so much more happening in Port Charles right now. Check Hollywood Hiccups often for updates, news, rumors and spoilers!