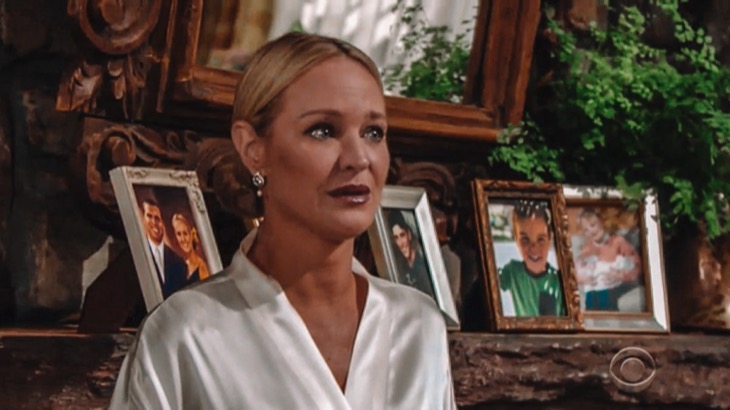 Okay, Sharon (Sharon Case) and Nick (Joshua Morrow) were supposed to be married on ‘The Young and the Restless’. And they still might make it through their vows, put rings on each other’s fingers, and live ever after, if not happily. But beyond all that, the bride must tell Nick what she knows.

Clearly, Nick’s secret is far worse than Sharon’s. He cavorted with Phyllis (Gina Tognoni) on the same day that Sharon took her engagement ring off. But what secret of Sharon’s is being referenced?

After rightfully spilling the above bombshell to her mother, Mariah (Camryn Grimes) reasoned that Nick may have felt vulnerable and knee-jerked into an old pattern. Maybe he was trying to protect Sharon by not telling her that he was with Phyllis. Possibly, ‘Phick-again’ was just a one-time thing.

Mariah was grasping at straws, attempting to give the strongest possible benefit of the doubt to a man she knows loves Sharon. Grimes’ conflicted character also knows that Sharon loves Nick, though that has never been and may not still be enough.

The Past and The Future collide this week on #YR! @CBSDaytime pic.twitter.com/kcRSOUzLVp

Leading a feature by saying that Sharon must tell Nick the truth implies something about the coverup crew, right? No. That topic had zero to do with Sharon betraying Nick in any way.

In contrast to Nick, Sharon didn’t want to go along with the trio of ladies who were involved in J.T.’s (Thad Luckinbill) accidental death and unlawful burial. She eventually relented, is maintaining her silence, and is risking more than Nikki (Melody Thomas Scott), Vickie (Amelia Heinle), and Phyllis are by taking that job at the GC police department working for detective Rosales (Jordi Vilasuso).

The truth being referenced, the truth that’s pressing this storyline, the truth that must be told comes within the next sentence. Sharon must tell Nick what she’s learned and confront him about it before, not after, the marriage happens. He owes her the explanation of his middle-aged life, right here and right now. Not later.

Sharon, you’re stronger, as you said. So is Nick. Make him tell you what happened so that maybe, just maybe, ‘Shick’ has a chance to survive this time.