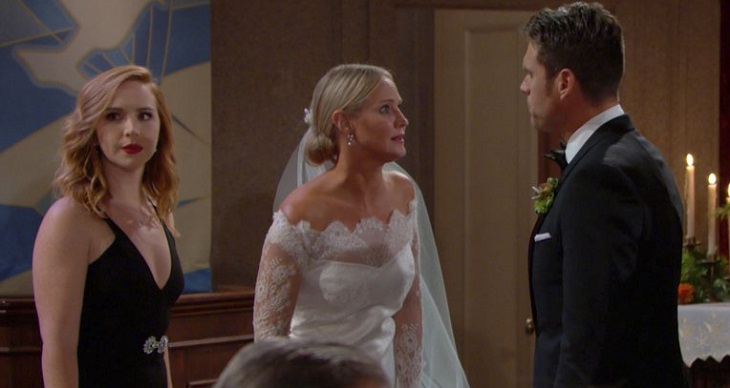 Sharon’s (Sharon Case) wedding vow rip-up on ‘The Young and the Restless’ was followed by tense dialogue that reveals Nick (Joshua Morrow) and Phyllis (Gina Tognoni) as phonies. Yes, one-off ‘Phick’ was to blame, not Sharon this time around.

Y&R actually did it. Behind the scenes decision-makers actually stopped Sharon and Nick from getting married again. However, there is a major difference in the way this nuptial collapse was written as compared to four falls ago when that edition of a reconciled ‘Shick’ nearly tied the soapy knot.

As viewers recall, the just-recast Phyllis awoke from a coma and made her way across the country to Genoa City in 2014. She arrived in a truck that was driving by one of the show’s original cast members as an homage to Y&R’s debut in 1973.

But instead of Phyllis busting through the church doors and telling the gathered crowd that Sharon withheld information about Summer’s (as played by Hunter King) paternity, thereby stopping 2014 wedding plans, Sharon took charge this October.

In a creatively written extended scene, Sharon stopped reading her pre-written vows, tore them up, and then tore into Morrow’s character. The look on Nick’s face was replete with shock. Yes, he, Phyllis, ‘Shick’s’ children and all else learned about ‘Phick’s’ impulse misstep.

Painting Sharon as the avenger in this particular prevented wedding makes sense. She’s come a long way within the last year and also holds no similar secret that Nick can counter. That’s right, the J.T. (Thad Luckinbill) mess that’s hanging over the coverup crew has Nikki (Melody Thomas Scott) as the accidental killer and Phyllis as the bullying fixer.

While Vickie (Amelia Heinle) is complicit, she’s more importantly the victim and the person who told Paul (Doug Davidson) a thoughtful alibi in order to protect the other crew members. No matter how Sharon’s forced connected to the referenced contingent comes out, it will in no way compare to Nick’s glam-on to Phyllis on the singular day that he and Sharon appeared to break up.

A shocking secret is revealed today on #YR! pic.twitter.com/fgqcIxpGHy

While Sharon and Nick fans did not want this outcome, it’s fair to suggest that this scenario makes sense. Unless this couple is quickly repositioned into a forgiveness pose, it looks like that’s all she wrote for ‘Shick’.