The Young and the Restless Rumor: Ashley and Kyle Betray Traci In Jabot Power Struggle 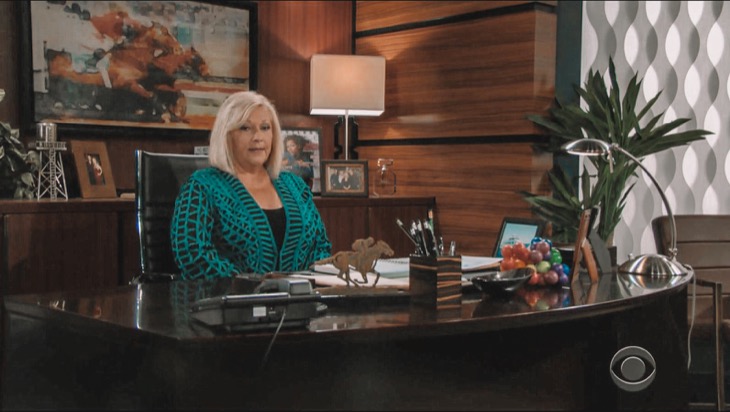 The Young and the Restless spoilers tease that Traci (Beth Maitland) finds herself central to not one, but two points of family drama. The ideas that she would become Jabot’s Chief Executive Officer and not be John Abbott’s (Jerry Douglas) daughter are equally incredible!

Which storyline is the more outrageous? Traci is an accomplished author, who left a current book tour to help one of her perceived brother’s, Billy (Jason Thompson), confront his returned gambling addiction. Yet, within days she is elevated to the seat her perceived father once held. The word perceived, as it is connected to Billy and John, implies that she’s not actually related to either man.

Traci: “I’m so sorry, Billy. I am willing to serve as C.E.O. of Jabot!”#YR #Boss pic.twitter.com/AzA2OkfSBt

It’s not inconceivable that Traci would technically become Jabot’s CEO, as her agreement to help the so-called family business is based on a momentary need that Ashley (Eileen Davidson) and to a different, self-serving degree, Kyle (Michael Mealor) jointly have. Both intend to replace Traci, who supplanted the ousted Billy.

However, the idea that Traci would be erased from John’s genetics is unbelievable, even within the context of Jack’s (Peter Bergman) invented paternity quest. At stake is the believability of the Abbott family’s backstory, but more importantly the intent of the show’s power-brokers.

Ashley was a newer character more than thirty years ago. So, it wasn’t a travesty to adjust her parentage from John to Brent Davis (Bert Kramer) back then. Viewers weren’t fully vested in Ashley Abbott.

Then, as 2018 unfolded, TPTB at Y&R decided to shift Bergman’s role. He would become a man without a last name. On the infinite upside, Marla Adams (Dina) was able to deliver some of the best performances offered by any daytime actor in years.

Dina’s spring admission, that Jack wasn’t John’s son, was staggering. But Y&R’s choice to not have Jack test his DNA against some retained, discovered, or obtained remnant of John was and remains the gaping hole in this long arc.

The audience isn’t naive. Viewers knew that the show was telegraphing a soapy goose chase by not writing any dialogue involving this obvious scientific solution.

The only way for Jack to be restored as an Abbott after half-matching his DNA to Traci and not matching with Billy at all, would be for his sister and brother to be revealed as never having been John’s children. Viewers are likely to be faced with deciding if the Jabot CEO drama and John’s legacy downgrade were worth both rides.