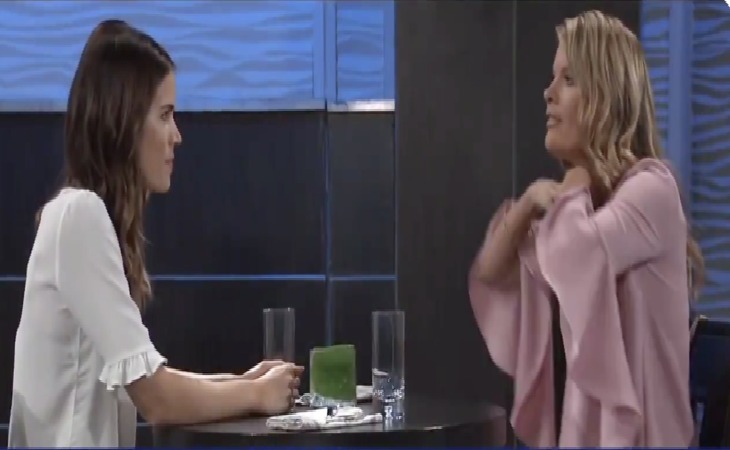 General Hospital (GH) spoilers for Friday, October 12, 2018, reveal secrets are exposed while some have their partner’s backs, others are given updates on their latest “projects”. A nervous meeting happens while family members avoid questions altogether. Assurances are made, but clearly cannot be kept. GH fans will not want to miss out on Friday’s cliffhanger episode, as it is a doozy!!

GH sources indicate that nurse Elizabeth Webber (Rebecca Herbst) was right and while she is at the park with Franco Baldwin (Roger Howarth) and her son, Aiden Spencer (Jason David), she wants to know why he has been keeping things from her. Will, he finally reveal what has been going on with him, that’s causing him to leave school?

Is Nina ready to meet her daughter? She may not have a choice. Tune into an emotional, new #GH – STARTING NOW on ABC! @TheRealStafford #GH55 pic.twitter.com/UIoui4Hz8u

General Hospital spoilers tease PI Curtis Ashford (Donnell Turner) meets with Valentin Cassadine (James Patrick Stuart) on the docks and gives him an update, revealing the ball in now in Sasha Gilmore’s (Sofia Mattsson) court. Meanwhile, Nina Reeves (Michelle Stafford) continues her day with her newfound biological daughter, Sasha up at the Metro Court restaurant. Nina pulls out her necklace with the half heart, asking Sasha if she has the other half of it. Will Sasha recognize it?

Outside of Kelly’s, Alexis davis (Nancy Lee Grahn) is joined by her daughter’s, Sam McCall (Kelly Monaco) and Kristina Corinthos (Lexi Ainsworth). Kristina does not want to be in the hot seat and plainly states she would much rather have a conversation about Sam and Jason Morgan (Steve Burton).

GH’s Carly Corinthos (Laura Wright) stands with her son, Michael Corinthos (Chad Duell) promising that Nelle Benson’s (Chloe Lanier) reign of terror will soon be over. As soon as those words leave her mouth, Nelle appears from behind Carly’s back with a guard by her side and with a smile on her face, she says, “Michael!” Will Carly be able to hold it together after everything this vindictive woman has put her family through?

Be sure to tune into ABC’s General Hospital (GH) on Friday, October 12, 2018, to catch up on all these exciting stories happening right now in Port Charles. Check Hollywood Hiccups often for updates, news, rumors, and spoilers!