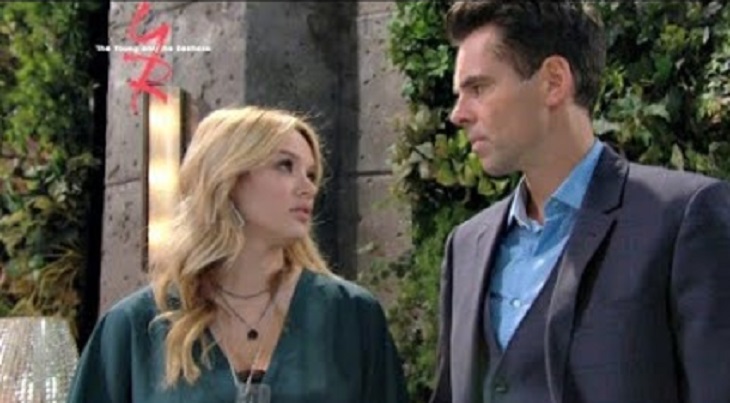 The Young and the Restless spoilers tease that the man Summer’s (Hunter King) claimed to want, Billy (Jason Thompson), may become far more than the object of her impulse obsession. Instead of fretting about Kyle (Michael Mealor) and Lola (Sasha Calle), Summer could easily find herself in a family way and thus tied to Billy forever.

Silly, or Syle? Actually, it’s only Kola for now. A translation for all who reject couple’s nicknames now follows.

Silly is the duo that’s existed in Summer’s mind for months. That would be Summer and Billy. Syle was Summer and Lachlan Buchanan’s edition of Kyle before a recast allowed Mealor to play a darker version of Jack’s (Peter Bergman) son. Kola is the quickly evolving Kyle and Lola, which Summer is fully opposed to.

Tessa gave the 411 to Lola about Kyle’s ex-girlfriend. Later, going only off Tessa’s verbal description, Calle’s likeable character spotted Summer based purely on her off-putting demeanor and connected banter at Crimson lights.

Following through on just how kooky the rewritten version of Summer has become, King’s now-villain character no longer wants Kyle, but also doesn’t want him to be with Lola. How Walnut Grove Academy!

Incredibly, or maybe not considering that it’s Summer, Billy was finally gotten. That eternal teenager himself played the total goof by taking Summer to bed. How, well, Silly that was, especially the night before checking into rehab.

Both parties were so reckless that Summer could have easily gotten pregnant. Either they didn’t protect themselves, or even if they did, the storyline can be written so that the low percentage option happened.

Billy’s rebuke this week stuns Summer because she naturally thought he wanted her. Viewers can’t blame Miss Newman in this instance because Billy summoned her to the Genoa City Athletic Club and told her that she was right about him wanting her. His revenge act against Phyllis (Gina Tognoni) was despicable and Summer did not see it coming because she is genuinely infatuated.

So, Billy thinks he’s gotten back at his seemingly former love, Phyllis, while also discarding Summer. But Y&R’s storyline option now allows Summer to be pregnant with Billy’s child.

Billy is out for revenge today on #YR. pic.twitter.com/idbXUIwNoC

This potential arc offers immense dramatic possibilities. Imagine what happens after Billy learns that Summer is carrying his child. How will Phyllis, Nick (Joshua Morrow), Kyle, Victor (Eric Braeden), and various other characters react? Surely their strong responses will resonate.

But the most unlikely couple in years, Silly, could also form an actual relationship. That alone would be worth the watch.