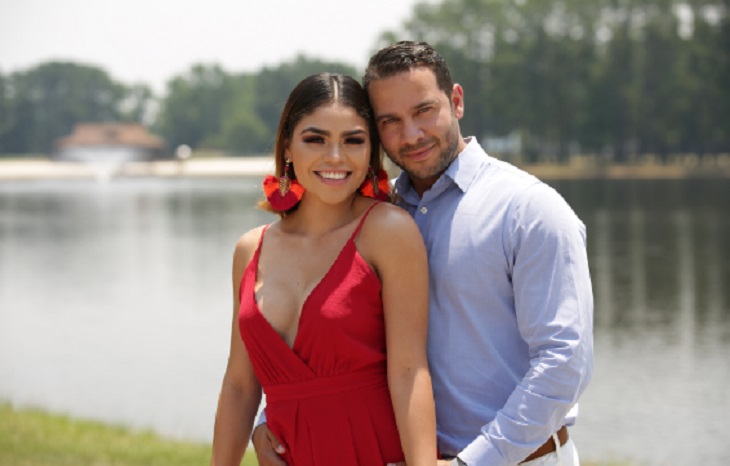 On today’s season opener of 90 Day Fiance’, our couples have met and become engaged. Now the couples have 90 days to get married, or the fiancé has to go home. Tonight we begin the journey of six new couples.

Ashley is a bartender and a mother of two children. Ashley strives to be a strong woman and an avid self-dense student. Ashley met Jay in a bar in Jamaica. Jay is the opposite of the men Ashley usually dated. Ashley and Jay have applied for the K-1 Visa and is on her way to Jamaica for the last step of Jay’s approval. Ashley’s friend Natalie doesn’t like Jay and believes he has already cheated on Ashley. Ashley doesn’t care what Jay has done while they were apart. Ashley says this will be a huge adjustment for them both. Natalie believes Ashley is ignoring red flags in her relationship. Ashley has the unrealistic view that it is none of her business what her fiance is doing in Jamaica, only cheating in the U.S. counts.

Jay is a tattoo artist in Jamaica. Jay brags about taking his father’s woman away from him. Jay says marriage will be a big change for him, but he prays this is the right choice. Jay lives with his sister. Jay’s sister advises him to be careful and get it together. Jays says he hasn’t cheated on Ashley and wouldn’t.

Colt is a self-proclaimed mama’s boy. Colt’s mother does everything for him. Larissa’s approval for her K-1 Visa has come through, but she hasn’t gotten her visa yet, so she has to miss her flight. Larissa thinks Colt should be able to keep booking flights and rescheduling until the Visa arrives. Colt thinks Larissa should understand that not everyone in America is a millionaire. Colt goes to visit his cousin John. John is concerned about Colt’s decision to get engaged to Larissa. Colt assure John he has thought about this.

John is not sure about Colt’s decision. John believes Colt and Larissa haven’t spent enough time together to know each other. John hopes Larissa isn’t using Colt for a free ride to America. Larissa has finally got her visa, but her flight isn’t for two weeks. Larissa is not happy that Colt wants to take longer for her to get there. Larissa accuses Colt of having doubts. Colt is upset and thinks Larissa is demanding, Larissa believes he doesn’t want to spend the money to get her to America faster because he wants to be alone.

Jonathan is a real estate broker in Lumberton, North Carolina. Jonathan is a former college baseball player. Jonathan met his fiance’ in Mexico on vacation. Jonathan believes Fernanda brings out the best in him. The age difference caused Jonathan to keep quiet about his relationship for a while. Jonathan is afraid of losing Fernanda because of their age difference. Fernanda’s visa approval is through, and Jonathan is going to Mexico to pick her up. Jonathan has paid for breast surgery for Fernanda already. Jonathan says Fernanda will be the perfect wife. John meets with his friend Dani. Dani feels protective toward Jonathan.

Fernanda is a very jealous person. Jonathan is more nervous than he thought he would be. Jonathan feels he has a huge weight on his shoulder. Jonathan says 90 days isn’t enough time, but it’s all they have. Dani wonders if Fernanda has had boyfriends before him. Jonathan Fernanda is making a big sacrifice for him. Jonathan’s mom believes he is going through a mid-life crisis. Fernanda has arrived in America to be with Jonathan. Fernanda and Jonathan arrive at the house, but she has to sleep on the couch because he hasn’t bought a bed yet. The power is out when they get home. Fernanda is not happy with underwear she finds in the house. Fernanda didn’t want other women’s stuff in the new house, Jonathan was supposed to have gotten rid of everything.

Hi do you not watch #90DayFiance? Because the new season started tonight and if this clip doesn’t convince you to get involved I’m sorry but u can’t be saved pic.twitter.com/PiCHRttQxj

Kalani is a single mom but has a lot of family support. Kalani’s father wants a better life than what he had for his children. Asuelu comes home and feeds the pigs and cracks coconuts. Kalani’s father is not happy with her choices at all and is ready to whip Asuelu if he isn’t the kind of man he feels Kalani deserves. Asuelu has to get not only the parents approval but Kalani’s sister’s approval as well and has 90 days to do so. Kalani has lied to her sister Kolini about Asuelu. Kalani isn’t excited because of her family. Kolini is upset that Kalani lied to her. Kolini has hated Asuelu for months because of this. Kalani feels responsible for the issues everyone has with Asuelu. Kalani loves them all and wants everyone to get along.

Eric is a former Marine and met Leida on an international website. Leida is a teacher; she’s been a model and an actress who has attended med school as well. Eric proposed to Leida after two days and is closer to his daughter’s age than his own. Eric’s daughters question why Leida would come here when her family is wealthy there. Leida has maids, cooks, drivers, etc. and is moving into a middle-class household in the United States. Leida and her son will be home with Eric in a few days.

Eric’s apartment is only two bedroom, and his daughter has to move out to make room for Leida. Tasha claims to be doing her best to find a place of her own. Tasha doesn’t understand why Leida is moving to America. Tasha believes this is a game. Eric tells Tasha that Leida has to be his priority. Leida has no idea that Eric lives in such a small apartment. Eric meets with his ex-wife and his other two daughters to discuss Leida and her son. Eric’s ex-wife questions why he isn’t moving with his fiance’ instead of her moving here. The ex-wife wonders about an ulterior motive. Leida doesn’t understand the child support issues. Leida’s ex-husband doesn’t pay child support for her son.