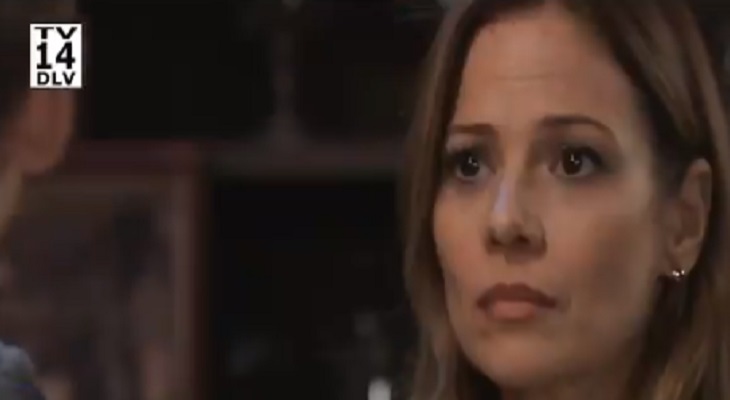 General Hospital (GH) spoilers for Tuesday, October 23, 2018, reveal confrontations, shocking revelations, questions and terrifying moments for several people in Port Charles. Some finally get their moments of satisfaction! GH fans will not want to miss out on Tuesday’s episode.

GH sources show Nina Reeves (Michelle Stafford) stands with Valentin Cassadine (James Patrick Stuart) at the Metro Court, where she confronts Ava Jerome (Maura West) informing her that she has a daughter with Dr. Sials Clay (Michael Easton), who is very much alive. How will Ava react to Kiki Jerome (Hayley Erin) having a half-sister?

Meanwhile, Kiki advises Dr. Griffin Munro (Matt Cohen) that through her own experiences, the only way to deal with her mother is to face her head on. It’s clear, Kiki is not planning on hiding her relationship with Griffin; is Griffin ready to publicize their romance?

General Hospital spoilers show Oscar Nero (Garren Stitt) shocks both his parents, Drew Cain (Billy Miller) and Dr. Kim Nero (Tamara Braun) that he fully intends not to be in the drug trial; announcing that he plans on “divorcing” them!

Jason Morgan (Steve Burton), once again comes to the rescue for Kristina Davis Corinthos (Lexi Ainsworth), who is extremely drunk. He brings her back to big sister, Sam McCall’s (Kelly Monaco) apartment, insisting she isn’t drunk. It is clear she is struggling after breaking up with Parker Forsyth (Ashley Jones) and returning to Port Charles.

At GH, Laura Collins (Genie Francis) thinks she has figured out what is going on with her husband, Dr. Kevin Collins (Jon Lindstrom), but when she questions him; he denies needing help. She is way off base, completely unaware that she is talking to Ryan Chamberlain, not her beloved Kevin. Elsewhere in General Hospital, nurse, Elizabeth Webber (Rebecca Herbst) gives out a horrified scream begging for help. What did she find?

Be sure to tune into ABC’s General Hospital (GH) on Tuesday, October 23, 2018 to catch up on everything happening in Port Charles right now. Check Hollywood Hiccups often for updates, news, rumors and spoilers!