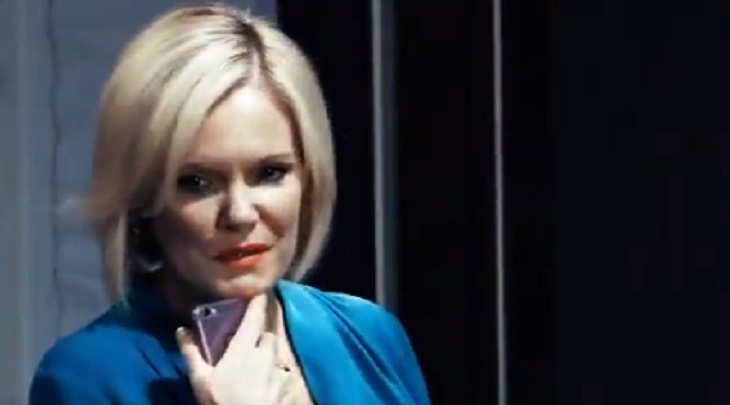 General Hospital (GH) spoilers for Friday, October 26, 2018 reveal threats are issued while others get closer. Some reconsider their plans while others question how sinister people can really be. GH fans will not want to miss out on Friday’s episode!

GH sources tease that Ava Jerome (Maura West) is not finished with Dr. Griffin Munro (Matt Cohen), then man who cheated on her with her daughter, Kiki Jerome (Hayley Erin); and has no problem telling him, “For all the things he has to be sorry for… this is nothing!” What is she subtly threatening him about this time?

Kiki seems to be quite intrigued with her newfound sister, Sasha Gilmore (Sofia Mattsson) and when she runs into her at the Metro Court, Kiki tells her, they should kicked this “getting to know each other” thing up a notch. It appears Sasha likes the idea as she smiles along with Kiki.

General Hospital spoilers show Damian Spinelli (Bradford Anderson) and Sam McCall (Kelly Monaco) dressed up, about to knock on someones door and Spinelli telling Sam the first move is all hers. What are the two plotting, and does this have to do with DA Margaux Dawson’s (Elizabeth Hendrickson) mother trying to claim the life insurance on Vincent Marino; now that he’s been declared murdered?

Lulu Falconeri (Emme Rylan) visits step father, Dr. Kevin Collins (Jon Lindstrom) wanting to know if some people are truly just born evil? She has no idea that she is actually speaking to Kevin’s evil twin brother, Ryan Chamberlain, who has taken over Kevin’s life! Meanwhile, Laura Collins (Genie Francis) meets with Carly Corinthos (Laura Wright) and tells her that if she wants to back out, there is no one who would blame her. What is Carly about to do?

Be sure to tune into ABC’s General Hospital (GH) on Friday, October 26, 2018 to catch up on everything happening in Port Charles right now. Check Hollywood Hiccups often for updates, news, rumors and spoilers!