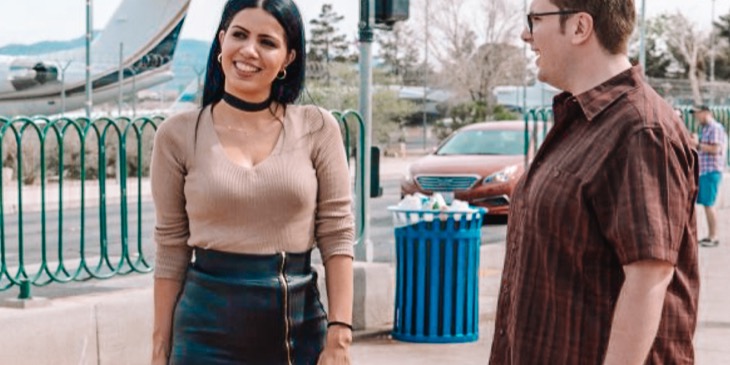 Colt is going to the airport to pick up Larissa. Colt’s mom is nervous about Larissa’s arrival. Colt hopes Larissa loves it there and they can be happy. Colt says it’s like Christmas morning. Larissa is disappointed that Colt doesn’t bring her flowers. Colt refuses to spend twenty dollars on flowers when they see them in a shop window. Larissa wants to know where the Vegas from the movies is. Colt has no air conditioning in the car, and Larissa says it is hotter than Brazil. Las Vegas is not like Larissa expected. Larissa is not happy with Las Vegas; she refers to it as a nightmare.

90 Day Fiance’s Jonathan goes out for coffee for himself and Fernanda. Fernanda doesn’t trust Jonathan because of the underwear she found in a dresser drawer. Fernanda has left everything in Mexico and Jonathan can’t even clean the house for her. Jonathan wants to prove to Fernanda that she can trust him. Fernanda agrees to give Jonathan another chance.

90 Day Fiance’s Steven is a waiter at a restaurant and likes to party. Steven stays between friend’s and his grandmother’s houses. Steven met Olga and was intrigued. Steven and Olga were enjoying their time together, and she got pregnant. Steven is determined to be in this baby’s life. Olga had to return to Russia, and they decided to get married and raise the baby together. Steven is going to Russia for the baby’s birth. Steven is nervous about going to Russia on a plane and his leaves tomorrow. Steven wants to bring Olga and the baby home with him. Steven goes to see his grandmother before heading to Russia. Steven wants to name his son Richie after his father.

Steven’s grandparents are taking him to the airport for his trip to Russia. Steven’s grandpa asks if he is ready to be a dad. Grandpa tells Steven he has to grow up now. Steven admits to having some growing up to do now. Grandma says Steven is immature and that worries her. Steven was dating a hot girl; they didn’t plan any of this.

Today is 90 Day Fiance’s Kalani’s birthday, and Asuelu is arriving today. Kalani’s mom is concerned that Asuelu is just using her to get to America. Kalani is worried that Asuelu doesn’t know anything about babies. Asuelu arrives at the airport and sings Happy Birthday to Kalani. Asuelu does a dance for Kalani in the airport; she is stunned and confused. Kalani is upset that he danced in front of everyone. Asuelu wants to know where the baby is. Asuelu tries to tell Kalani how to drive and that upsets her. Asuelu is excited to see the baby. Asuelu is afraid of the roads in America. Asuelu is surprised by the house they are living in at this time. Kalani’s mom expects a lot from Asuelu. Kalani expects Asuelu to help with the baby and around the house. The baby cries when Asuelu picks him up. Kalani’s mom asks about Asuelu’s trip and laughs about his dance.

Leida wants Eric to sponsor a maid from Indonesia to help her with the transition of moving to the US. #90DayFiance pic.twitter.com/DUdiDph7Io

90 Day Fiance’s Eric had to drive from Wisconsin to New York to pick Leida up from the airport. Eric plans to adopt Leida’s son. Leida’s sister has come with her and is very judgemental. Eric cannot wait to get married to Leida. Leida’s parents are very controlling. Leida always wanted to be a doctor in America. Leida is happy to be in America; her sister doesn’t seem to be impressed. Leida and Eric argue over how to put the luggage in the vehicle. Eric knows it will be hard for Leida to adapt to her life here.

Leida’s parents are flying in to check on her and her son in a few days. Eric wants to stay in Pennsylvania because New York is too expensive and he doesn’t want to spend that much money. Eric wants Leida to see how small his apartment is back home. Eric gets up to make breakfast the next morning. Leida wants to know why they don’t have a live-in maid. Leida’s sister wonders if ninety days is enough to get to know each other. Leida’s sister wonders how she is going to adjust to life in America. Eric has to prove he can give a better life to Leida and her son. Eric doesn’t care about the sister’s opinion.

Ashley has flown to Jamaica for Jay’s interview for his visa. Jay picks Ashley up at the airport. Ashley loves the weather in Jamaica. Jay doesn’t want people to think he’s using this as an opportunity to come to America. Jay has gotten a hotel for him and Ashley. Jay has made a heart out of rose petals and had champagne for them. Jay is afraid that Ashley will run out on their engagement. Ashley feels pressure to keep Jay satisfied.

Jay has his interview for his visa. Jay has studied for the interview, but he messes up when Ashley questions him. Jay comes back from his interview, and his visa went through. Jay is so happy he wants to cry.