The Young and the Restless Spoilers: Halloween Shockers – What Will Happen To Sharon, Nikki, Victoria, And Phyllis This Week? 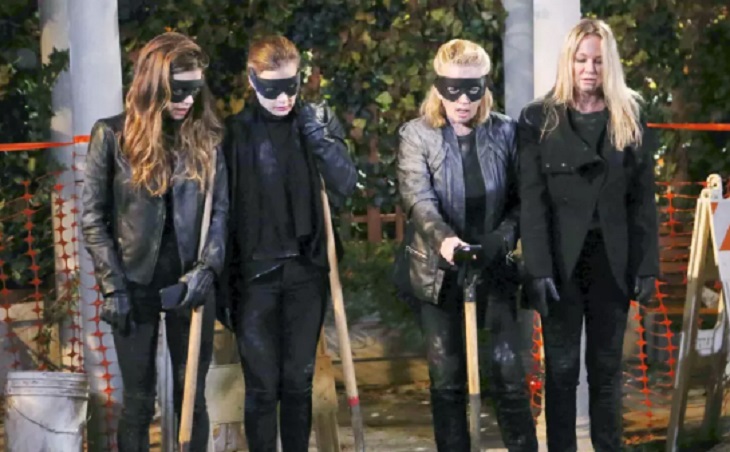 Halloween week appears teased as the end of the coverup crew on ‘The Young and the Restless‘, or is that just how the writers want it to seem. Adorned in their adult costumes, J.T.’s (Thad Luckinbill) unofficial pallbearers are shown digging up his grave on All Hallow’s Eve.

Last spring’s macabre scenes winked at Dark Shadows, which was and remains daytime’s most unique soap operas. That 1966-1971 steamer went full Gothic and explored many fantastical topics, including vampires, ghosts, werewolves, witches, and other mythic figures. The comparison to that Great (yes, a capital letter G was purposely used) show in this instance is the manner in which J.T.’s final resting place was initially dug.

Many Y&R fans are likely unfamiliar with the act of grave-digging. Regardless of their experience, they understand that a perfectly formed rectangle would not result, as was the case when the coverup crew buried J.T. Many perfect graves were also dug on DS, while the fans willingly suspended disbelief in order to further many intriguing and at the time, groundbreaking (pun implied) plots.

Rey (Jordi Vilasuso) has been all over the coverup crew since he first arrived in Genoa City. He’s soon going to expose this group, or catch them in the act of attempting to burying their secret even further.

Nikki and Vickie are in serious danger of being jailed, not just arrested. Nikki did not report accidentally killing J.T. and then participated in his burial. Vickie lied to Paul (Doug Davidson) about having helped J.T. escape town. Both women committed foolish crimes.

Whether Davidson’s character recurs, in order to complete the case he started, isn’t known. Paul’s absence might be used as a plot cover, as Rey’s lack of initial direct involvement could be mined to whittle Nikki and Vickie’s punishments, or so Michael Baldwin (Christian LeBlanc) will likely pursue.

While she appointed herself as the fixer, Phyllis is less culpable than Nikki and Vickie. However, Sharon is working for the GC Police Department and could easily face severe reprisal, unless Rey finds a way to take it easy on his seeming future love interest.

Fans of ‘The Young and the Restless’ rightfully express their opinions on a regular basis. So, what will happen, if anything, to the coverup crew this Halloween week?