The Young and the Restless (YR) RUMOR: Dina Follows Ashley To Paris? 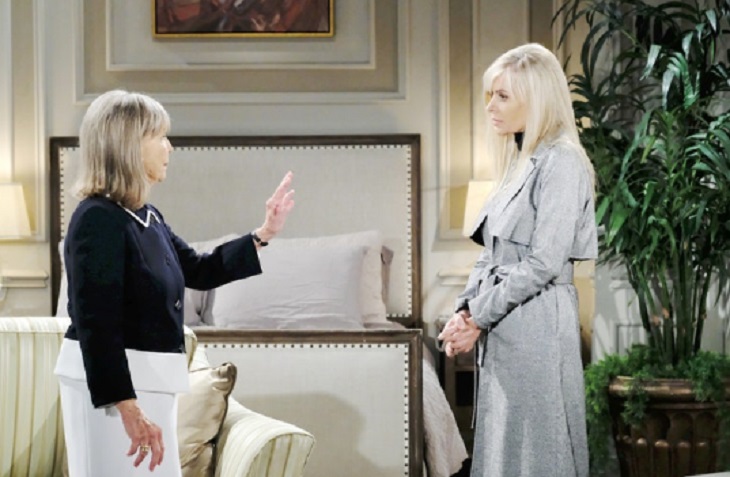 Dina (Marla Adams) infamously returned to Genoa City last year on ‘The Young and the Restless’. Ashley (Eileen Davidson) is now opting to move to France. Might Dina also head back to the country where she lived for many years?

Y&R fans have wondered how far the show would go with Dina’s storyline. Widely praised as one of the most important, touching, terrifically written and acted storylines in years, there is no doubt that the Alzheimer’s-based plot has been immensely powerful. At the same time modern daytime drama fans have been allowed to glimpse at rich soap opera history.

There have been purposeful moments when Dina has demonstrated clarity. Beyond the realism demonstrated through the presentation of her condition, Y&R also was giving itself an out. By keeping Dina functional it was also indefinitely extending Adams’ ability to remain a part of the cast.

The Young and the Restless Spoilers: Halloween Shockers – What Will Happen To Sharon, Nikki, Victoria, And Phyllis This Week?

The long arc that led to Dina’s reconnection with her children also sent Jack (Peter Bergman) on a paternity goose chase. Ashley’s cruel use of her mother’s condition as a weapon couldn’t be repeated by another character in the near future without feelings staid. So other creative plot lines will need to be created if Dina stays.

So, what other plots could Dina be written into? Well, the possibilities are endless. For the most part, allowing Dina’s loved ones to care for her would continue to humanize surrounding personalities that can be written into too many escapist dramas. Beautiful flashback sequences, showing Dina in her younger days, would also be welcomed. And, Adams’ character could surely be shown in some type of regular productive effort, which would support her dynamic spirit.

Adams’ performances can’t be lauded loudly enough. This veteran actor was given scripts that transformed a person who was a modest character in the mid-1980’s. Dina’s main purpose at that time was to fill Ashley’s backstory, specifically regarding the Brent Davis (Bert Kramer) reveal.

While briefly returning to Y&R on a few occasions, there was little plot-based reason to suggest that Dina could make the type of impact that she has. So why not allow Adams to stay with the cast? Her reprised role has greatly enhanced this show and can continue to do so indefinitely. Dina is needed in GC.