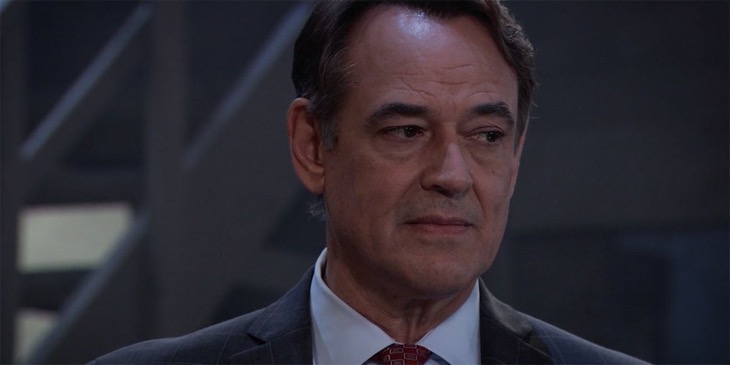 General Hospital spoilers tease that Ryan Chamberlain (Jon Lindstrom) not only broke up with Laura Collins (Genie Francis) in Friday, November 2nd’s episode, he framed her for the murder of Mary Pat Ingles (Patricia Bethune) as well! Laura is just asking too many questions and becoming too much of a problem for Ryan, and if she doesn’t watch it, she too could become a victim!

He was looking at the hook he used on Mary Pat as he was talking to Laura at the docks! He knows she didn’t see him put it there or she would have definitely confronted him about that as well!

So now Ryan is wooing Ava with gifts? AND he’s an artist. Look at that presentation, it’s a work of art.#GH #RyAva pic.twitter.com/06b0skQIMv

Meanwhile, in Ava Jerome’s (Maura West) gallery, the rest of Mary Pat was found macabrely posed in her desk chair with a large Jack-O-Lantern placed on top of it like a head! Ava of course screamed and backed away in horror as she realized what it was, and shortly after Nina Reeves (Michelle Stafford) arrived to confront her about messing with her “daughter” Sasha Gilmore (Sofia Mattsson).

Ryan screwing over Carly! What a sweetheart 😂 #KevinRyan #gh pic.twitter.com/LQBndFqkUY

It won’t be Ava’s hair. Either Chase or Jordan or Ava herself will point out the hair is too long. Ryan obviously planted hair in Mary Pat’s hand, but whose? And how did he get into Ava’s gallery to begin with? It makes no sense to frame Ava for the murder; since she is one of the only people Ryan has ever encountered who he thinks understands him! Besides, it’s obvious he is very attracted to her—she turned his eye away from Felicia Scorpio (Kristina Wagner)!

Ryan didn’t plan to murder Mary Pat either—he used a weapon of opportunity, and when she started blackmailing him he knew he had to get rid of her. As far as how he got into Ava’s gallery, he must have picked the lock in a way that didn’t damage the lock. Since it was Halloween, maybe he used a skeleton key! Maybe he’s twisted enough that he thinks Ava would think a decapitated body with a pumpkin head would be funny!

Mary Pat didn’t grab the hair of a female attacker and pull it out; and even though Ryan doesn’t get that close with Laura, if it did happen in a struggle it’s possible she could have grabbed some of Laura’s hairs that may have been on Ryan’s clothing from a few hugs he granted her.

But it’s much more likely that after he murdered her he was trying to think of a convenient frame-up to draw any unwanted attention away from himself, since he as Kevin had been likely the last person to see her alive, aside from the murderer. Of course he is the murderer, but no one knows that except himself and Mary Pat, and she’s not talking!

Both Laura and Carly Corinthos (Laura Wright) are dangerous to Ryan because of their insistence in uncovering secrets at Ferncliff. But Laura’s hair would be much easier for him to obtain than Carly’s. Remember, he didn’t plan Mary Pat’s murder and he would need to get the hair ahead of time in order to frame someone by planting it in her cold, dead hand. He couldn’t have gotten it during his brief time at the Floating Rib, unless he just happened to spot her brushing her hair and cleaning it out of her brush.

Even then, forensics will be able to tell if the hairs were plucked from a person’s head or cleaned out of a brush. He pointed a finger at Carly, so to speak, when questioned at the Floating Rib about Carly’s argument with Mary Pat at Ferncliff, but he’s upset enough with Laura that he might have put her hair in Mary Pat’s hand instead, to lead police on a wild goose chase! Keep watching GH and checking General Hospital spoilers frequently to see the continuing investigation and how it concludes!