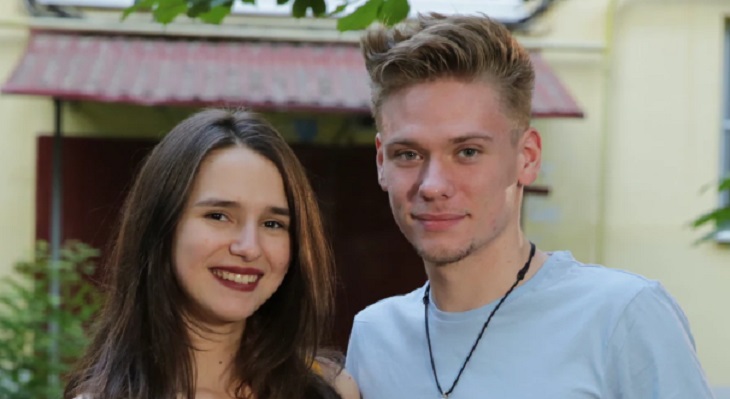 90 Day Fiance’s Jay’s Visa is approved. Ashley and Jay go to fruit stands in Jamaica. Ashley wants to visit Jay’s father before leaving for the United States. Jay’s father joins them, Ashley says Jay used to be like his father but isn’t any longer. Jay’s father is respected because he had a lot of girlfriends.

Jay and Ashley are getting on a plane for America. Jay is very excited but he doesn’t know what to expect in the U.S. Ashley is ready for them to get married. Jay is cold and wants Ashley to turn the heater on in the car. Ashley finds Jay’s reaction amusing. Jay wonders if he is in a dream. Jay tells Ashley he wants to jump in the snow. Ashley explains how different laws are here. Ashley hopes there aren’t any racial issues because he’s the only black man in her community. Jay tells Ashley to slap him and wake him up. Ashley gives Jay a tour of the house before taking him to their bedroom.

90 Day Fiance’s Steven flies to Russia for the birth of his and Olga’s baby. Steve must take a seven-hour train ride to get to Olga. Olga meets Steven at the train station. Steven is excited and kisses her belly. Olga and Steven both had a troubled childhood; she believes this makes them get along better.

Steven is feeling Olga’s belly, and she’s telling him how the baby lies. Steven doesn’t know any Russian but plans to stay there for at least two months. Olga says it’s weird having Steven there instead of having to face time with him. Olga gives Steven a tour of the apartment. Steven has brought some things to Olga for the baby. Steven wants to go shopping tomorrow. Steven wants to be there for the birth. Olga has to get special permission for Steven to be there when the baby is born. Olga has to go to the hospital in two days. Steven is stunned that he is only going to have two days with Olga.

Steven asks if Olga believes the baby can feel him touch him. Olga and Steven are going to buy clothes for the baby. Steve doesn’t want Olga to go overboard buying clothes. Steve has a list he wants to stick to, but Olga has other plans.

90 Day Fiance’s Eric and Leida are waiting for her parents to arrive. Eric decides they need to make a trip to Philadelphia for a day trip. Leida’s sister Reina doesn’t want her to move to America. Leida is afraid that Reina will cause them to have to go home. Leida doesn’t like that Eric has to pay child support. Reina is surprised that Leida doesn’t have a plan B.

Leida’s parents are arriving in America. If Leida’s parents find out that Eric doesn’t have a lot of money, they will make her go home. Leida’s dad hopes Eric will work hard for prosperity here.

Colt shows Larissa the house. Larissa says the house is too small and wants to move to a bigger house with a pool. Colt doesn’t know what Larissa wants him to do because she doesn’t like anything. Larissa doesn’t like the slot machine in the house. Colt’s mom has made beef stew, Larissa isn’t ready to eat. Colt’s mother thought this would be easier. Colt takes Larissa’s luggage upstairs. Colt’s mother is upset because she doesn’t think things are going well.

Colt had high hopes for the meeting with his mother and Larissa. Colt goes to talk to his mother about Larissa. Colt’s mother expected Larissa to be different; she doesn’t feel that Larissa tried to bond with her at all. Colt goes down and eats beef stew. Larissa wants to be alone she’s upset over Colt always being with his mother. Colt’s mom says Larissa didn’t have anything good to say about anything. Colt’s mother says Larissa is selfish and demanding. Colt tells his mother to give it time. Colt is upset that his mother and Larissa are immediately at odds.

Jonathan and Fernanda begin sorting her clothes and putting them away. Fernanda loves Jonathan’s sense of humor, but the move has been stressful. Fernanda misses her little brother more than anyone but misses her mother and sister too. Fernanda took care of the younger ones because her mother works all the time and she watched the kids. Fernanda’s family cannot come to her wedding, and that upsets her. Jonathan holds Fernanda as she cries. Jonathan has to do whatever it takes to make Fernanda feel comfortable here.

Oh no! 😢First day of Mom+Colt+Larissa and things aren’t going well. See what happens tonight at 8/7c on #90DayFiance. pic.twitter.com/LFtaQJhnzU

Kalani and Asuelu are going to dinner at her parent’s house. Kalani’s sister hates Asuelu because she lied about him cheating. Kalani says her family could try and prevent her wedding at the end of the 90 days. Both Asuelu and Kalani are nervous about this dinner. Asuelu hopes the family will accept him as Kalani’s husband. Kolini is anxious because of Kalani’s lies. Asuelu hugs Kolini and her father when they arrive. Asuelu apologizes to Kalani’s father and tells him it is his place to look after his family.