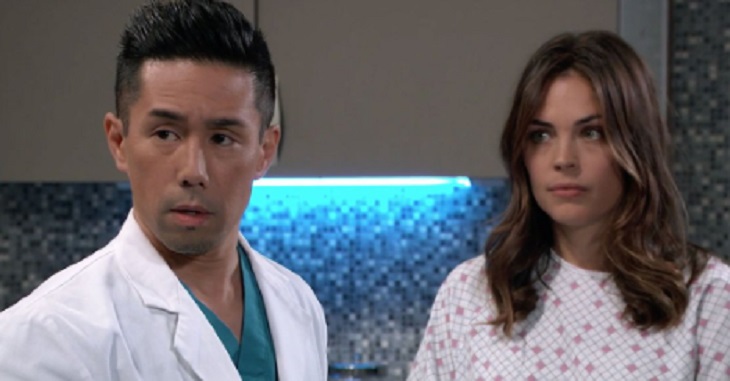 General Hospital (GH) spoilers for Wednesday, November 7, 2018 reveal secrets are told as confessions are revealed. Someone finds something disturbing as friends attempt to uncover the truth for others. A confrontation happen among a struggling couple. GH fans will not want to miss out on Wednesday’s episode!

GH sources tease that Maxie Jones (Kirsten Storms) finds sister-in-law, Nina Reeves (Michelle Stafford) at her door and admits to Nina that she wasn’t alone for her birthday. Will she reveal that she spent the evening with Peter August (Wes Ramsey)?

Michael Corinthos (Chad Duell) finds his grandmother, Bobbie Spencer (Jacklyn Zemen) and demands to know what she could have possibly seen at Brad Cooper (Parry Shen) and Dr. Lucas Jones’ (Ryan Carnes) place that has gotten her so rattled. Could it have something to do with baby Wiley?

General Hospital spoilers show Brad telling his best friend, Dr. Britt Westbourne (Kelly Thiebaud) everything about the baby swap. He wants to know how Britt can’t possibly think this will destroy his entire life. Does Britt have a plan to save Brad and help him cover up the messy situation he has gotten himself into?

Jason Morgan (Steve Burton) calls in reinforcement for Carly Corinthos (Laura Wright), meeting at the Corinthos house with Sam McCall (Kelly Monaco) and Curtis Ashford (Donnell Turner); pleading with Carly, saying if this helps her put Ferncliff behind her, then this is worth it. What are they plotting and why does Carly look so concerned?

Laura Collins (Genie Francis) finally confronts Ryan Chamberlain (Jon Lindstrom) at General Hospital. She still believes that Ryan is her husband Dr. Kevin Collins. She tells him she believes there is a third person in their marriage and she thinks she knows who it is. How will Ryan deal with Laura confronting him so abrasively?

Be sure to tune into ABC’s General Hospital (GH) on Wednesday, November 7, 2018 to catch up on everything happening in Port Charles right now. Check Hollywood Hiccups often for updates, news, rumors and spoilers!