The Young and the Restless Spoilers: Rey Kisses Sharon! 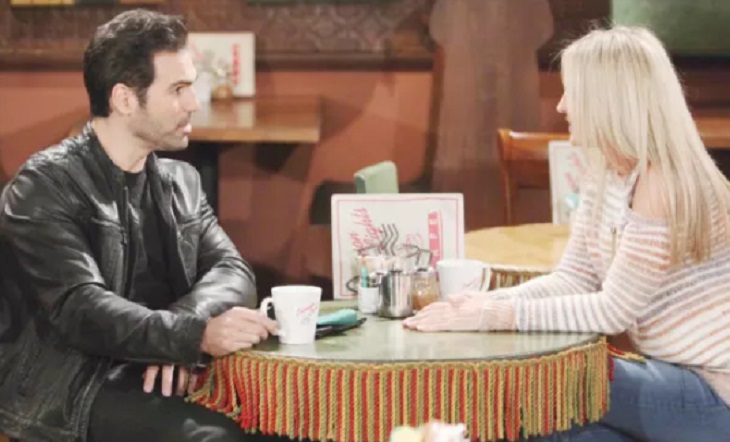 The Young and the Restless (Y&R) spoilers tease that things will heat up between Sharon (Sharon Case) and Rey (Jordi Vilasuso) during the week of November 12. After they admitted they had feelings for each other, they both mutually decided it was best they did not act on them. Not only is Rey investigating JT’s (Thad Luckinbill) murder, but he is still married.

Rey decides to call Nick (Joshua Morrow) in for questioning about JT’s murder. The Young and the Restless spoilers state that Rey firmly believes that someone in the Newman family killed JT. He also believes the family will cover for each other and it may be almost impossible to crack the case.

After Rey is done drilling Nick, Sharon’s ex blasts her, accusing her of giving Rey false information that led to the interrogation. Of course, Sharon isn’t sure what she did wrong. Sharon feels terrible that Nick could be blamed for a crime for had a role in.

A surprise visitor will stake her claim and shake things up in Genoa City. Don’t miss #YR this week! pic.twitter.com/cQdxkYYi82

Later, Sharon corners Rey and she tells him that Nick is innocent. She explains there is no way he could ever kill anyone. Y&R spoilers tease that Rey explains that he is looking at every angle. Then, Sharon brings up their friendship and things take a major turn.

Sharon asks him not to give up on their friendship. She is frustrated because he is giving off mixed signals. Sharon confronts him about it and it led to a passionate moment between them. Rey pulls Sharon in for a hot kiss and now there is no turning back. It will quickly become complicated when Rey’s wife arrives in Genoa City during the week of November 12.

Soap fans, are you surprised Rey kissed Sharon? Don’t forget to come back later for more the Young and the Restless (Y&R) spoilers, news, and casting updates!