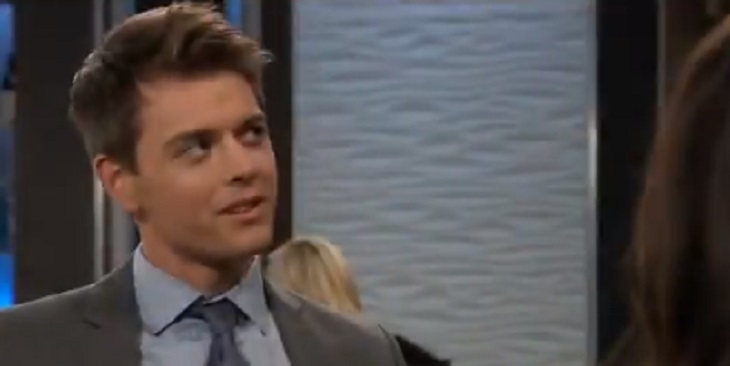 General Hospital (GH) spoilers for Friday, November 16, 2018 reveal acquaintances becoming closer as exes talk. Questions are asked, while some feel cornered and others demand confrontations. Does someone fear for their life? GH fans will not want to miss out on Friday’s episode of General Hospital!

GH sources tease that Ryan Chamberlain (Jon Lindstrom), who is still posing as his twin brother, Dr. Kevin Collins, meets with Ava Jerome (Maura West) at the Metro Court. He seems to have taken a vested interest in her as she takes a sip of her drink; he tells her he has the perfect cure for her rage.

Valentin Cassadine (James Patrick Stuart) goes to see his ex-wife, Nina Reeves (Michelle Stafford) in her Crimson office telling her that she doesn’t owe him any explanation about inviting Peter August (Wes Ramsey) to be her date to Curtis (Donnell Turner) and Jordan Ashford’s (Briana Nicole Henry) wedding; but she still looks guilty.

Lulu Falconeri (Emme Rylan) meets with her daughter, Charlotte Cassadine’s (Scarlett Fernandez) teacher, Willow Tait (Katelyn MacMullen) but Willow tells her that she prefers both of them to be there for what she has to tell them. Will she wait for Charlotte’s father, Valentin to be there to explain that Charlotte has been bullying her own cousin, Aiden Spencer (Jason David)?

General Hospital spoilers reveal Kiki Jerome (Hayley Erin) is already fed up with her sister, Sasha Gilmore’s (Sofia Mattsson) antics and informs her boyfriend, Dr. Griffin Munro (Matt Cohen) that it is about time Sasha heard some truth herself. Will Kiki confront Sasha about the way she has been flirting with Griffin, making Kiki and Griffin very uncomfortable?

At the Metro Court, Michael Corinthos (Chad Duell) is sitting with Sam McCall (Kelly Monaco) when Jason Morgan (Steve Burton) walks in; Michael questions them both, wondering if this is a coincidence or an ambush. Meanwhile, Sonny Corinthos (Maurice Benard) goes to visit DA Margaux Dawson (Elizabeth Hendrickson) at her hotel suite. She asks him, point blank if he plans on killing her. What do you think Sonny has in store for Port Charles’ DA?

Be sure to tune into ABC’s General Hospital (GH) on Friday, November 16, 2018 to catch up on all these exciting stories happening right now in Port Charles. Check Hollywood Hiccups often for updates, news, rumors and spoilers!