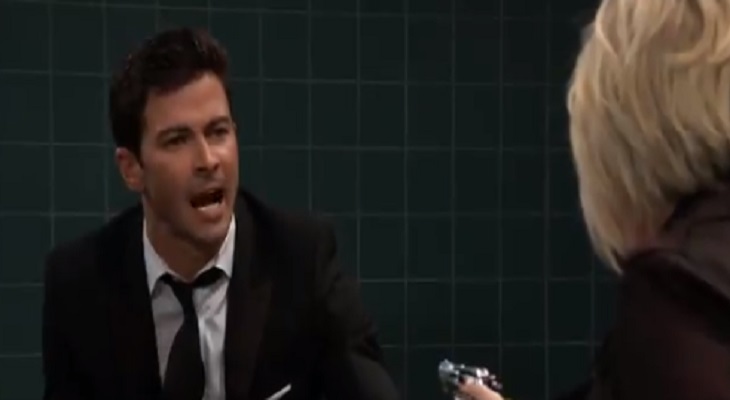 General Hospital spoilers show Kiki’s death rocks Port Charles but one person in particular will go through hell because of it. Griffin Munro (Matt Cohen) will be arrested and considered as the prime suspect in the investigation of his girlfriend’s homicide. It is very likely that Ryan is responsible for pinning the blame on Griffin. It would seem that Ryan may have planted an evidence that will make the cops believe that it was Griffin who stabbed Kiki to death.

Griffin will try to convince the authorities that he is innocent. However, his pleas will fall on deaf ears and fans can expect to see the former priest behind bars by the end of the week. It is going to be a suspenseful week at General Hospital. How long will Griffin stay in prison? When will the police know that it’s not Griffin and they need to be looking at someone else?

Jordan Ashford becomes obsessed with the investigation involving Kiki Jerome’s death and he will do everything he can to find her killer. He gets a lead that could help him find the person responsible for the brutal slaying of Kiki Jerome. Will Jordan be able to crack the case or is Ryan sending her off on a wild goose chase. Viewers also have to stay tuned to know how Ava will take the news of that her daughter has been killed.

Meanwhile, Jason Morgan will receive an important news. Damian Spinelli manages to link the name Wilson to the mystery patient who is being held at Ferncliff. Spoilers reveal he may have discovered another clue that could help him identify the person that is being held there.

Elsewhere, Sonny and Carly carefully consider their options as they think about their future. Although their hands are pretty much tied in terms of what they can do, both of them are eager to know what they want to accomplish. If they keep their lines of communication open and if they work closely together, they can create a situation where they can better decide what they want to win, lose, or sacrifice.