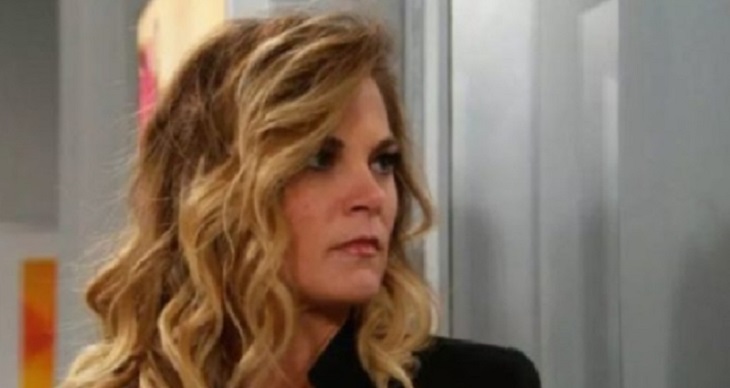 Rebekah (Jennifer Taylor) noticed Nick (Joshua Morrow) the came into her line of sight on ‘The Young and the Restless’. Within moments she asked Phyllis (Gina Tognoni) about the dark-haired guy with a killer smile. And just like that Jabot’s Chief Executive Officer conceived of a scheme to use Nick as a pawn.

If ‘Red’ isn’t careful, her plan to help Jabot secure Miss Barlow could damage ‘Phick’. Their rebooted relationship is steeped in a double-rebound, rather than pure love. While it feels as though Phyllis and Billy are merely making nice for Jabot-based reasons, they still care for each other. So, a ‘Philly’ bounce-back is probably still on the soapy table.

Billy (Jason Thompson), who recently cast Phyllis off, could end up befitting from her plan. Like his boss, he wants Jabot to cinch a deal with Rebekah. She’s the top flight executive that Billy initially made contact with and didn’t want to tell Phyllis about.

Kyle (Michael Mealor) was included in Billy’s clandestine attempt that was intended to fly under the radar, with hopes of impressing Jabot’s Board of Directors. A chance mention of Rebekah’s name happened while Kerry (Alice Hunter) was speaking with Phyllis. Billy’s efforts were busted, however he played it off well.

Phyllis then opted to work with Billy and the Genoa City Athletic Club meeting was set. Rebekah met with the former ‘Philly’ before later having a sit-down with Devon (Bryton James) at his penthouse. Y&R might have already introduced more than a one-off character within its cast, though time will reveal Taylor’s contract status.

Rebekah’s interest in Nick just might be enough for Phyllis to use as a sweetener. If Nick is willing to fully play along, Jabot might land the business partner Phyllis and Billy are seeking.

But Phyllis better watch that Nick doesn’t swoop in and somehow land Rebekah for Dark Horse. The newest character in GC, among many, is smart and very appealing. So it’s also possible that Taylor’s character creates something romantic with Phyllis’ current boyfriend.