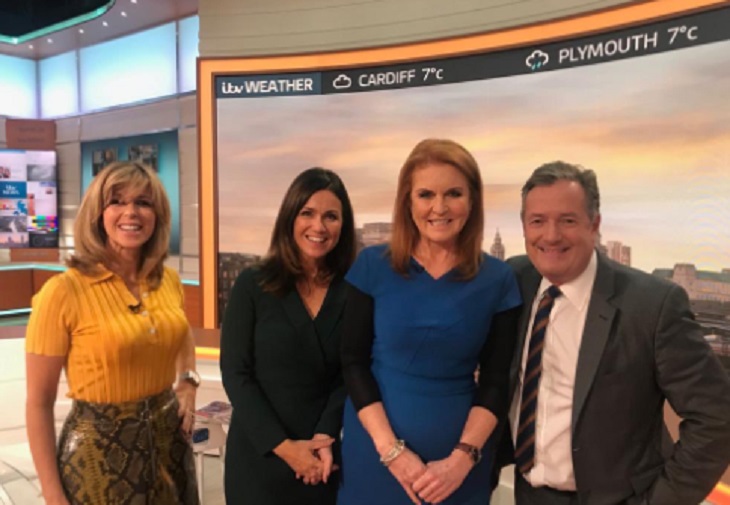 It looks like Sarah Ferguson is having a comeback, both in front of the cameras and behind palace doors. There are new reports that indicate Sarah might not be persona non grata at Buckingham Palace after all. Even though Sarah has done and said plenty of things to embarrass the Windsor family in the past, it looks like most of it might have been forgiven, even though it definitely hasn’t been forgotten.

According to the Daily Mail, Princess Eugenie and Jack Brooksbank’s wedding was a huge success for the mother of the bride. She enjoyed spending time with her ex-husband, Prince Andrew, and even managed to spend a little time with her former in-laws, Queen Elizabeth and Prince Philip. She posed for family photos next to the British royals and Prince Philip reportedly even exchanged a few kind words to his former daughter-in-law throughout the day.

Many royal critics are surprised by this, considering how Prince Philip has never really forgiven the Duchess of embarrassing Prince Andrew and the rest of the royal family with her media antics throughout the years.

What’s more, reports indicate that Queen Elizabeth is actually quite fond of the Duchess. That’s because she realizes how much Fergie actually makes her son Prince Andrew happy. The Queen also sees Sarah Ferguson as a lively woman, even with all the mistakes she’s made throughout the years. And despite the fact that Sarah and Andrew are divorced, they have managed to remain good friends throughout the years.

There’s even speculation that Sarah and Andrew might remarry at one point. Despite everything that has happened in the past, they are very comfortable with one another and their current situation. One report even says that it’s unlikely that Queen Elizabeth would object to seeing Sarah and Andrew remarry. A senior courtier told The Daily Mail, “It isn’t as though they are young people jumping from one mistake to another. Prince Andrew and the Duchess are moving into their 60s, mature and experienced. But, of course, they seem very happy as they are and no one can say that they ever will want to remarry.”

Of course, Buckingham Palace is yet to make any comments about Sarah Ferguson’s relationship with Prince Andrew or her role within the royal family for that matter. In the meantime, don’t forget to check back with CDL for all the latest news and updates on Sarah Ferguson and the entire royal family right here.