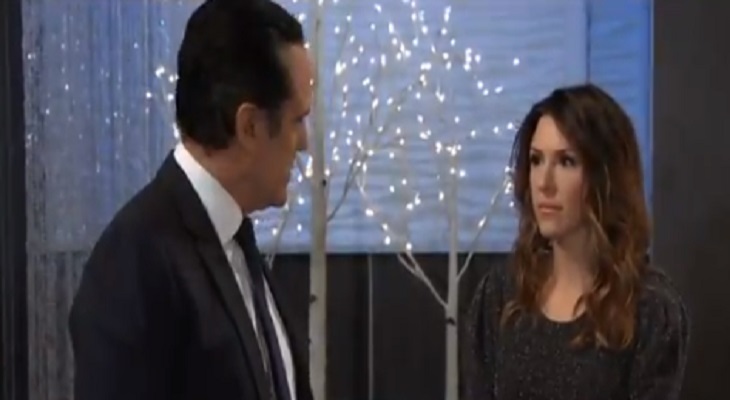 General Hospital (GH) spoilers for Thursday, December 27, 2018 reveal a lot of propositions, leading to some serious talk among several citizens of Port Charles. A wife voices her concern while a husband and father protects what is his own. There’s a new stranger in town. GH fans will not want to miss out on Thursday’s episode of General Hospital!

GH sources reveal Anna Devane (Finola Hughes) looking confident and very happy as she asks someone to move in with her. Who is she talking to? Dr. Hamilton Finn (Michael Easton) or her newfound son, Peter August (Wes Ramsey)?

After Oscar Nero (Garren Stitt) makes the request that his parents reunite; it leads to Drew Cain (Billy Miller) and Dr. Kim Nero (Tamara Braun) having a rather intense and emotional conversation of the all that has happened this year; Kim cannot help but smile as Drew talks to her.

General Hospital spoilers reveal Laura Collins (Genie Francis) is very worried about her husband, Dr. Kevin Collins (Jon Linsdtrom); still completely oblivious to the fact that Ryan Chamberlain, his sinister and serial killer twin brother has replaced him. Laura fears that Kevin is having another breakdown. Meanwhile, Ryan returns to his office and finds someone there asking if he can help them?

Sonny Corinthos (Maurice Benard) has always had the heart for weaker women in his life and DA Margaux Dawson (Elizabeth Hendrickson) isn’t any different. He does confront her at the Metro Court, reminding her that she doesn’t have any leverage with Jason Morgan (Steve Burton).

Jason seems to have a mystery of his own to solve when a random stranger approaches him at The Floating Rib, saying “It’s really you!” Could he be mistaking Jason for Drew?

Be sure to tune into ABC’s General Hospital (GH) on Thursday, December 27, 2018 to catch up on all these exciting stories happening right now in Port Charles. Check Hollywood Hiccups often for updates, news, rumors and spoilers!