General Hospital Spoilers: Ryan Off His Game? Did He Think He Could Frame Curtis For Peyton’s Murder? 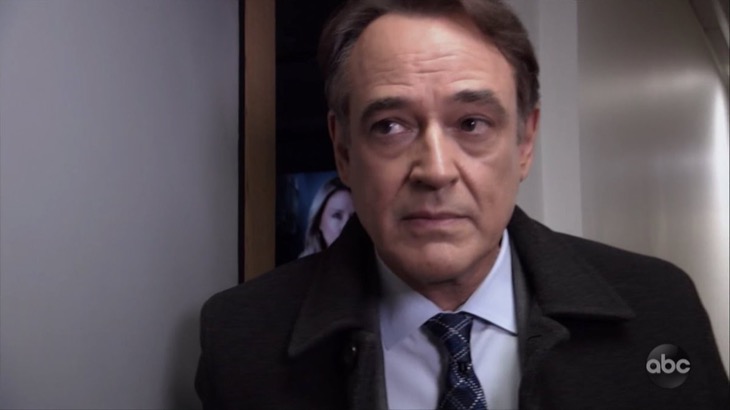 General Hospital spoilers tease that Ryan Chamberlain (Jon Lindstrom) was so nervous from Peyton Mills’ (John Patrick Jordan) suggestion that he was still alive, that he got sloppy when he murdered him, and that may contribute to his undoing! Several things fit the Holiday Killer’s pattern, but several things don’t.

The Holiday Killer didn’t leave a lot of blood around with Mary Pat Ingles (Patricia Bethune) or Kiki Jerome (Hayley Erin); in fact, hardly any at all with Kiki. He knew where to stab to leave the least blood. He left a lot of blood with Peyton, and although he killed him on a holiday, killing a man is a change to the pattern. He also appears to have skipped Christmas unless another body is found stashed somewhere, or what might be left of it.

True, Ryan had to kill Peyton; he was afraid that people would figure out he’s alive and not his twin Kevin if the documentary was produced. However, police will have lots of that documentary footage that was already shot as clues to the killing and perhaps to the killer! It’s not like Ryan to leave a bunch of stuff that could give the police clues, he didn’t destroy the footage or any notes Peyton may have made. More than likely Peyton recorded something or wrote something that the police might find about his theory about Ryan being alive; he may have even been recording as he told Ryan about it!

The stupidest thing Ryan did this time, however, is to obviously try to frame Curtis Ashford (Donnell Turner) for the murder! Ryan was nervous, and just wasn’t thinking. If he moved Peyton’s body to the Metro Court before it being discovered by Jason Morgan (Steve Burton) you would think he would have known that Curtis was at the gala with Jordan (Briana Nicole Henry) at the time when he would have had supposedly murdered Peyton!

Several people besides Jason and Sam McCall (Kelly Monaco) stood in that same spot before the discovery! And what motive would Curtis have had? A smart move would have been to obtain some meth or another illegal drug that causes violent behavior and plant it in Peyton’s office or traces on his body, that way at least the police would have thought Curtis had a motive since he had drugs in his past. It’s obvious that Ryan was so scared, or so mad, he wasn’t thinking straight! Plus, with Curtis married to the police commissioner, unless she recused herself from the case, it’s a sure bet Curtis wouldn’t be a person of interest!

It is said that every criminal, no matter how crafty or cunning he or she is, sooner or later, makes a mistake that will lead police right to him or her. Ryan may just have made one of those mistakes by trying to frame Curtis for the murder of Peyton Mills! Stay tuned to GH and keep checking General Hospital spoilers frequently to see how Ryan Chamberlain is ultimately caught!