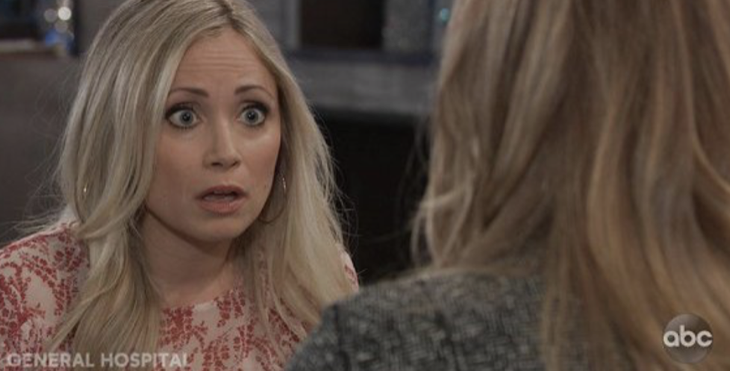 General Hospital spoilers tease that Sonny Corinthos (Maurice Benard) will take seriously his conversation with DA Margaux Dawson (Elizabeth Hendrickson) about helping find the serial killer, and also take seriously the protection of those he loves!

Other General Hospital spoiler tease that Lulu Falconeri (Emme Rylan) will, or possibly already has, put herself in grave danger where Ryan Chamberlain (Jon Lindstrom) is concerned!

Sonny has, as Margaux implied, “protection” at his beck and call although he would have his men act as lookouts to watch for suspicious activity or people and give tips to the DA or the police, or have them act as guards to protect his loved ones, not dress potential suspects in cement jackets and drop them in the harbor! Although, as close as Sonny was to Kiki Jerome (Hayley Erin) he may be tempted!

Considering that another journalist, Peyton Mills (John Patrick Jordan) who was getting ready to premiere a documentary on Ryan Chamberlain was the latest murder victim, and whose body was found by Jason Morgan (Steve Burton) Sonny’s going to be extremely concerned about his daughter-in-law Lulu, especially since son Dante Falconeri (Dominic Zamprogna) is still on assignment with the WSB and on leave from the PCPD. That leaves Lulu, Charlotte (Scarlett Fernandez) and Rocco (O’Neill Monahan) alone in their home much of the time, and Lulu on her own going here and there as she does her investigative reporting.

Sonny knows there’s a serial killer on the loose, and whether this is a copycat inspired by Ryan or not, this latest murder puts Lulu in danger because she and Peyton Mills had Ryan stories in common. Sonny could even be wondering if Dr. Kevin Collins has gone psycho and been acting out his brother’s persona, including murders since he’s obviously not been himself over the past few months.

General Hospital Spoilers: Ryan Off His Game? Did He Think He Could Frame Curtis For Peyton’s Murder?

It’s kind of surprising the Spencers haven’t suspected something similar to what happened to their patriarch Luke Spencer (Anthony Geary) may have happened to Kevin. Luke didn’t kill anyone (that we know of) as “Fluke”, but his psychotic break and strange behaviors such as digging up his cousin Bill Eckert’s corpse and having conversations with him in the basement of the Spencer childhood home were because of his failure to deal emotionally with his unintentional murder of his parents, Tim and Lena Spencer.

It would be easy for them to think the same of Kevin, that all the reminders of Ryan had caused him to break and even act out! Stay tuned to GH and keep checking General Hospital spoilers to see what happens in the continuing story of the “Holiday Killer”!