Young and the Restless Spoilers: What Will the New Year Bring For Genoa City’s Couples? 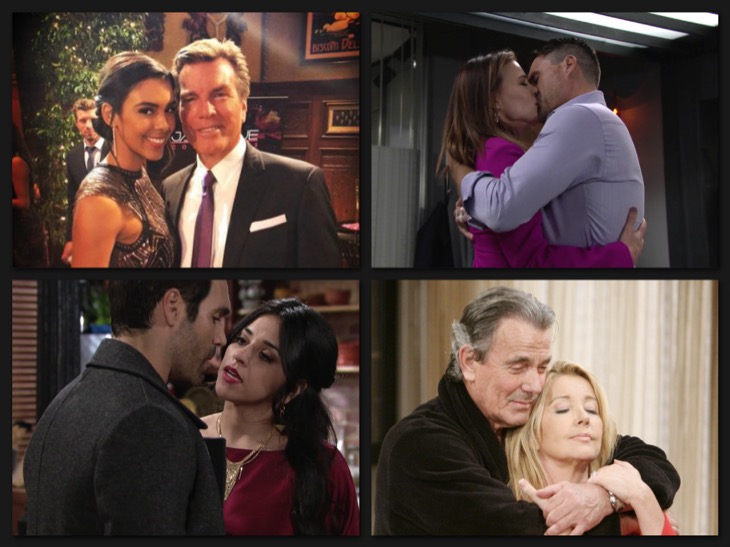 Plenty has happened this year on ‘The Young and the Restless’. But what will the new year bring for Genoa City’s couples? Due to behind the scenes job shifts at Y&R there’s no doubt that the new regime will make some on-screen changes.

Along with discovering who moved J.T.’s body, fans will learn the cover-up crew’s legal fate. While it may take a while, Nikki (Melody Thomas Scott) will recover from her latest physical drama. As for her one and only, well, Victor (Eric Braeden) will continue to be who he’s always been, her sweetie. ‘Niktor’ is sure to fight again, but will they remain together?

Couple splits and forms were plentiful within the past year. Clearly, the next twelves months won’t prove smooth for all pairings.

Jack’s (Peter Bergman) recent connection with Kerry (Alice Hunter) is nice. Both parties are good souls who clicked unexpectedly. Miss Johnson appeared to be aloof upon her arrival in GC, when actually she was putting up modest defenses that ‘Smilin’ Jack’ quickly melted with classic Abbott charm. Kerry has become aware of Jack’s many wives. Will she become his next spouse?

#YR Jack to Kerry "You are the one I want to be with. No one has made me this happy in a long long time"

Agreed Jack. The last woman to make you this happy? Kelly Andrews(@CadyMcClain)

Sorry/not sorry it wasn't Phyllis, especially the way she screwed Jack over for BillyBoy pic.twitter.com/mMah5b4e5V

Speaking of the Abbott men, Kyle’s (Michael Mealor) romantic pursuit hasn’t gone as smoothly. There’s been some stops and starts with Lola (Sasha Calle), who, like him, has no experience with a serious relationship. Kyle’s past connections have been shallow and Lola’s heart hasn’t been won until now. ‘Kola’s’ development will continue into the new year, but its survival isn’t guaranteed.

Rey (Jordi Vilasuso) and Mia (Noemi Gonzalez) are together, for the moment. But Sharon (Sharon Case) could easily become Rey’s significant other in 2019. Arturo (Jason Canela) remains in Mia’s mind, but Abby (Melissa Ordway) is determined to not allow her potential future husband to be pulled back to the past.

Nick (Joshua Morrow) sees Phyllis (Gina Tognoni) as a comfortable landing spot after ‘Shick’s’ collapse. If Sharon doesn’t pair with Rey then she’ll remain an option for Nick. Whether Case’s character wants Nick back remains to be seen.

Meanwhile, Billy (Jason Thompson) continues to move past Phyllis. Vickie (Amelia Heinle) has long owned his heart and has returned to his life again lately. ‘Villy’ comes back in 2019? Maybe.

Of course, there are other couples that can be considered or new ones that don’t yet exist and will form. These major parts of Y&R’s new year’s plots will surely prove compelling after the current calendar turns.

Fans of ‘The Young and the Restless’ rightfully express their opinions on a regular basis. So, which couple will face the most drama in 2019? Please vote in our poll below!

Soap Opera Spy is a leading source of engaging information about ‘The Young and the Restless’.