Days Of Our Lives Spoilers: Jennifer and JJ In Shock As Jack Walks Into The Room 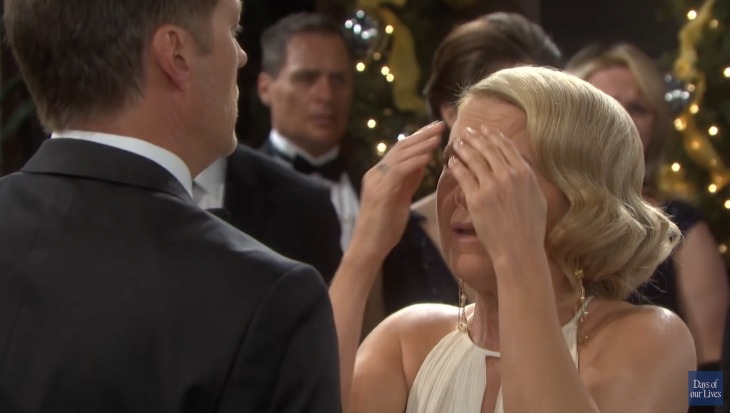 Days of Our Lives spoilers tease that Jennifer Horton, formerly Deveraux (Melissa Reeves) and JJ Deveraux (Casey Moss) will be in shock, as Jack Deveraux (Matthew Ashford) walks into the Horton Center alive, after being gone for six years! It was enough of a shock for those Salem residents who attended the gala to see Eve Donovan (Kassie DePaiva) make her dramatic entrance in a black robe lined with red.

Some even thought she was Vivian Alamain (Louise Sorel) come back from the dead again! However, when Jack comes in after her, people will be absolutely floored, and Jennifer and JJ’s world will be turned upside down!

The problem is, Jack will not remember anyone. He has amnesia, and other Days of Our Lives spoilers say that Jennifer will even pull him into a passionate kiss to try to spark some memories of their love. A spoiler video shows they are sitting on the end of a bed when she kisses him, it may be in the hotel room where viewers saw him and Eve getting ready to go to the Horton Center.

Days of Our Lives #DOOL Spoilers: Jack and Eve Return – How Their Stories Intertwine @celebratesoaps https://t.co/LyGbjPKLhs

At least Jennifer didn’t kiss Jack in front of her poor date Dr. Henry Shah (Andre Khabazzi)! Jennifer was obviously not so quite ready to move on as she thought, but then who could have guessed Jack was still alive and would show up at the Horton Center that very night?

Abigail Deveraux (Kate Mansi) will also find out her father’s alive, although he won’t remember anything and have a meeting with him on Wednesday, January 2nd. Whether Jack also meets his grandchildren, baby Charlotte (Chloe Teperman) and Thomas DiMera (Asher Morrissette) when Abigail meets with him remains to be seen. No doubt her thought-to-be-dead father’s sudden reappearance will be a shock to Abby too, but she’s handled much worse than that since he’s been gone and out of her life, so she should have no problems handling this!

Days of Our Lives Spoilers: Kate Exposed, But Revealed Secret Frees Her From Stefan’s Grasp

Keep watching the NBC soap and check back with Soap Opera Spy for the latest “Days of Our Lives” spoilers, rumors, updates and news.