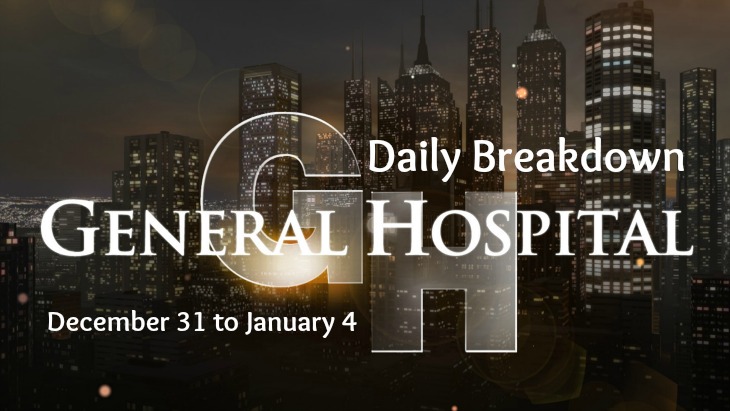 On Monday, December 31, GH will air a repeat of 1997 episode. In this special classic episode, the bay Michael (Chad Duell) storyline will begin, which will give insight to the Wiley storyline.

There will be no episode aired as ABC will feature sports coverage. Not to worry, General Hospital will return on Wednesday, January 2.

Lulu will go visit Ava and will give her some type of news. It isn’t clear if she is there for her mother, Laura (Genie Francis) about Kevin (Jon Lindstrom) or if it has something to do with Kiki’s (Hayley Erin) death.

Kristina is having a rough time and feels the need for a change. Daisy (Kelsey Wang) is the only one that Kristina has been connecting to lately. Could Daisy be more than just a friend?

Drew convinces Kim to spend time with Julian. Kim and Drew have been spending time together due to Oscar’s (Garren Stitt) illness. Drew will suggest she spend some quality time with her man.

Sam’s (Kelly Monaco) past continues to haunt her as she cannot figure out what the mystery person wants from her. The 2019 preview reveals that this storyline will spill into a bigger story involving both Sama and Jason.

Sonny (Maurice Benard) distracts Mike (Max Gail). Drew confides in Curtis (Donnell Turner). Drew is very worried about Oscar and his battle with cancer. He feels that Kim may want to reunite with him, which is why he pushes her to spend more time with her man, Julian.

Jordan (Briana Nicole Henry) needs Curtis’ help on Friday. Jordan has been trying har dot crack the murder case but she hasn’t been able to do it alone. She may need Curtis to help he rout.
Laura will be touched by Kevin’s (Jon Lindstrom) support. It’s clear the support isn’t genuine, but it will be enough to trick Laura for the moment.

It sounds like a great week ahead on General Hospital. Stick with us for more GH spoilers, news, and casting updates!