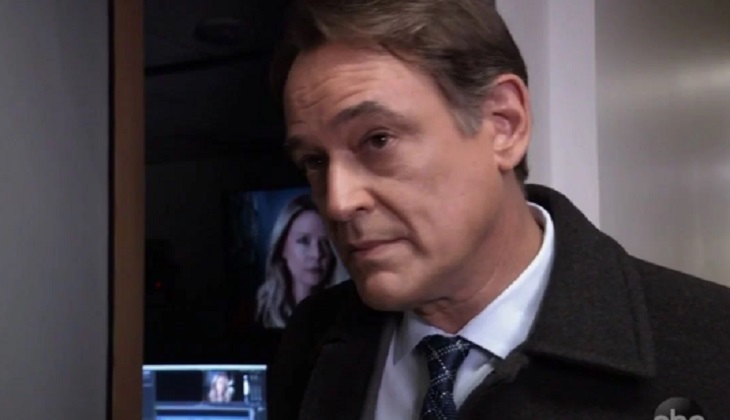 General Hospital spoilers tease that Ryan Chamberlain’s (Jon Lindstrom) murder of Peyton Mills (John Patrick Jordan) may have the opposite effect of what he wanted to achieve, and instead of preventing his exposure and capture, it may just lead to it!

Savvy General Hospital viewers are wondering, other than Ryan’s wanting to stop a documentary that implies he may still be alive, why he would kill someone who was producing a documentary about himself?

He’d covered all his bases by telling Carly Corinthos (Laura Wright) that her neighbor at Ferncliff was a “Wilson Ritter” which seemed to satisfy her curiosity and throw her off his trail, and now she probably won’t bother telling anything about the name “Wilson” to anyone who would make a connection to “Todd Wilson”, Ryan’s name in Texas.

Ryan went out of pattern by killing a man; Ryan never killed a man previously, and neither has his new incarnation as the “Holiday Killer”. He also went out of the holiday killing pattern by skipping Christmas and killing on New Year’s Eve; but Peyton was in his way. He wasn’t a planned target. He also went out of pattern by leaving massive blood all over Peyton’s studio, some of it tellingly spattered on Felicia Scorpio’s (Kristina Wagner) image on the screen where Peyton had paused it after showing his interview with her to him.

Ryan may not be “into her” anymore, but she’s definitely still on his unfinished killing business list and he may go after her next, judging by his obvious anger at what she said about him in the interview! He did use gloves to go back into the studio to retrieve Peyton’s cell phone that he sent Curtis Ashford (Donnell Turner) a text on, but did he use gloves when he killed him?

It’s downright amazing that he showed up at Ava Jerome’s (Maura West) in what appeared to be the same suit and tie with no blood on him! He obviously didn’t go back into Peyton’s studio with a Hazmat suit on, although that would be the perfect thing to protect himself and his clothes!

Ryan may think that police won’t connect this killing to the others, because of it being a male victim, skipping a holiday, and leaving blood all over the place; he did seem to make a feeble attempt at framing Curtis, but it obviously didn’t work.

But just the fact that someone would kill a producer working on a documentary about Ryan Chamberlain’s killing spree twenty-five years ago may prompt theories of there being something in that documentary that the killer wanted to hide, and that might connect them to Ryan…although it may be Ryan as Kevin who’s the suspect first!

Keep watching GH and checking General Hospital spoilers frequently to see when and how the “Holiday Killer” cases are solved!