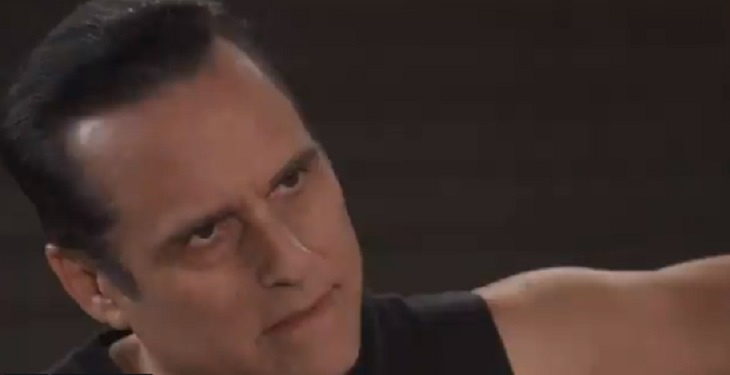 General Hospital (GH) spoilers for Friday, January 4, 2019 reveal those who feel unsafe are taking action. Obsessions, Warnings and Confrontations happen while another makes his intentions very clear. GH Fans will not want to miss out on Friday’s episode of the ABC soap opera!

GH sources show Detective Harrison Chase (Josh Swickard) takes the initiative and begins to teach several of the women of Port Charles on how to defend themselves; including Lulu Flaconeri (Emme Rylan), Elizabeth Webber (Rebecca Herbst), Nina Reeves (Michelle Stafford), Maxie Jones (Kirsten Storms) and Willow Tait (Katelyn MacMullen). Hopefully none of these women will find themselves on the receiving end of Ryan Chamberlain’s wrath.

PCPD Police Commissioner, Jordan Ashford (Briana Nicole Henry) talks the case over with her husband and PI, Curtis Ashford (Donnell Turner) revealing she needs a breakthrough. Curtis seems concerned with her obsession on the case.

General Hospital spoilers reveal Stella Henry (Vernee Watson) sits with Mike Corbin (Max Gail), informing him that things may be very different at the day care home he goes to. Meanwhile, Sonny Corinthos (Maurice Benard) confronts Marcus Godfrey (Nigel Gibbs), reminding him that this is all about doing what is best for Yvonne Godfrey (Janet Hubert) and his father, Mike. Will Marcus listen to any reasoning before he removes Yvonne out of the home?

Dr. Kevin Collins (Jon Lindstrom) aka Ryan Chamberlain stands up in front of a crowded Charlie’s Pub and announces he feels it is his time to make his intentions very clear; a concerned Laura Collins (Genie Francis) looks on, unsure what will come out of her beloved “Kevin’s” mouth this time. What does Ryan have to say and how will it affect Laura?

Be sure to tune into ABC’s General Hospital (GH) on Friday, January 4, 2019 to catch up on all the exciting things happening right now in Port Charles. Check Hollywood Hiccups often for updates, news, rumors and spoilers!