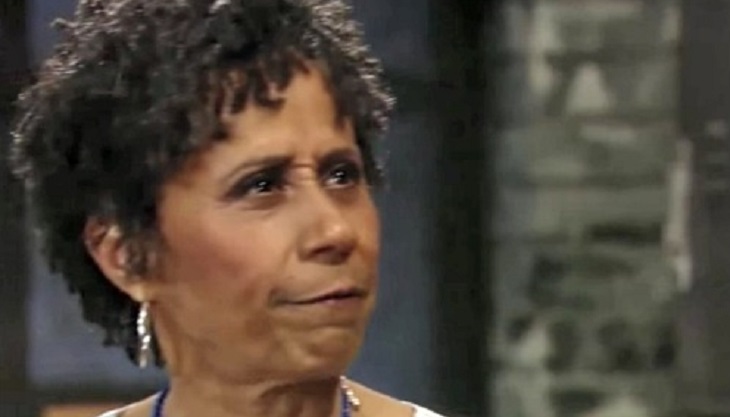 Mike and Yvonne are both in the stage of Alzheimers where they no longer recognize loved ones and sometimes not even themselves. Mike seems to be a little worse than Yvonne, with not recognizing Sonny Corinthos (Maurice Benard) and that he is his father and Sonny is his son in a recent episode. Yvonne, on the other hand, thought Marcus was her big brother trying to stop her teenage romance with Mike!

Stella, as a geriatric social worker knows all the ins and outs of Alzheimer’s disease and dementia. Marcus is leaning on her a great deal already, but the two of them were set to get married years ago before Stella chose to break off the engagement when her apparently terminally ill sister needed her to take over raising her two sons, Tommy (uncast character) and Curtis Ashford (Donnell Turner).

Stella, in spite of herself, seems to still carry somewhat of a torch for Marcus, since she was obviously disappointed to find out he moved on and got married. So there are plenty of old embers that could reignite in Stella, but will Marcus reciprocate?

Marcus is in a vulnerable state, with his wife Yvonne slipping away before his eyes. He obviously still loves Yvonne, but most of her is just not there anymore, although her physical body is. She wouldn’t react or care if Marcus moved on or didn’t visit her as much.

General Hospital Spoilers – What About Yvonne?

His main reason for the visits is to try to keep Yvonne from forgetting him and all they have shared together over the years, but the fact that she’s been married to him for thirty years or so just isn’t real to Yvonne anymore. This is a very sad state for Marcus to have to endure! It wouldn’t be surprising if some long-buried embers for Stella lit up for him as well!

General Hospital spoilers tease that somewhere down the road Stella and Marcus may fall in love again and renew their relationship; however if this takes place while Yvonne is still alive, or if she passes has not yet been revealed. Stay tuned to GH and keep checking General Hospital spoilers frequently to see this complicated, slowly evolving love story of Stella and Marcus begin!