General Hospital Spoilers: Kim and Alexis Have It Out Over Julian! 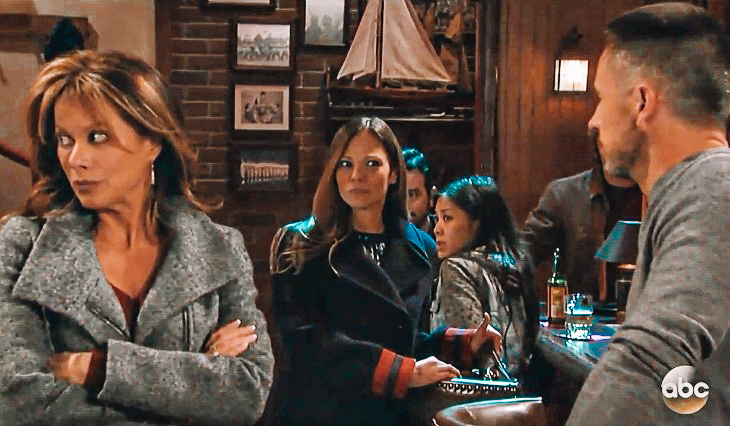 General Hospital spoilers tease that Kim Nero (Tamara Braun) and Alexis Davis (Nancy Lee Grahn) will have it out over Julian Jerome (William DeVry)! Julian let Kim assume that he slept with Alexis on New Year’s Eve when he saw Kim and Drew Cain (Billy Miller) in a clinch in their son Oscar’s (Garren Stitt) hospital room and made more out of it than he should have! Julian, in fact, didn’t sleep with anyone, at least not that was shown onscreen, and certainly not with his ex-wife Alexis, although many “Julexis” fans would like to see that happen!

According to a preview in Soap Opera Digest, first Alexis overhears Drew lambasting Julian for cheating on Kim and then questions Julian, who says he let Kim fill in the blanks herself about who he slept with, and of course, she would assume Alexis. Alexis then goes to Kim’s office to try to tell her it wasn’t her Julian slept with, if anyone, and tries to encourage her to give “Charlie” another chance.

Kim, not being in the mood to discuss it tears into Alexis, and tells her there will always be something between Julian and Alexis whether they are together or not! She tells Alexis if she wants him, she can have him!

So #gh has Drew and Julian, each with another woman that he passionately adores and as a part of couples that have large fanbases, arguing about Basic Kim? Where is #julexis? This is REACHING, @GeneralHospital. Why not show what people want to watch? @nathanvarni @ABCNetwork pic.twitter.com/pT7jIZo5TG

What it all boils down to is the stress level both Julian and Kim are under, Julian because of his niece Kiki’s (Hayley Erin) as yet unsolved murder, and Kim worrying about Oscar and leaning on Drew, and Julian naturally is jealous. Kim has not been available to him as much and with Drew much more since Oscar went into the hospital, and actually, Julian himself has not been as available to Kim either, since he’s been grousing around and trying to support his sister Ava Jerome (Maura West) as well as he can in her grief.

Alexis has been meaning to come off as a supportive friend to Julian, but she’s not fooling anyone except herself, and Julian is so wrapped up in everything else that’s going on around him he’s failing to see it! It’s possible this may lead to a reconciliation of the “Julexis” super couple, but if it does, it’ll be a real slow burn before anything ignites! Keep watching GH and checking General Hospital spoilers frequently to see if Kim and Drew and Julian and Alexis keep “changing partners” or if we will see them stay as is!