Days of Our Lives Spoilers: Ben And Ciara Split, Will This Push Him Over The Edge? 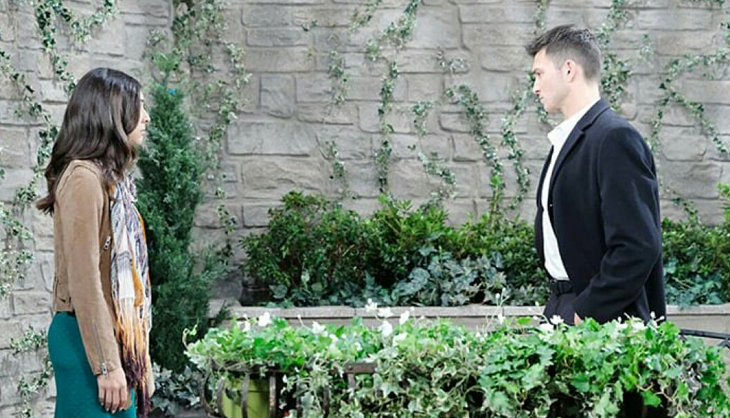 “Days of Our Lives” spoilers reveal that Ben Weston (Robert Scott Wilson) and Ciara Brady (Victoria Konefal) will end their romance. Find out what leads up to the big split and how Ben could deal with his broken heart.

In the latest issue of Soap Opera Digest, it is confirmed that Hope Brady (Kristian Alfonso) crashes Ben and Ciara’s date. She interrupts to inform Ciara about Ben kidnapping Gabi Hernandez (Camila Banus). Understandably, Ciara is upset by this news and asks Ben if it’s true.

This leads to Ben and Ciara having a serious conversation. As fans recall, Ciara made it clear to Ben that she didn’t want him working for Stefan DiMera (Tyler Christopher). However, nobody in Salem would give Ben a chance, not even as a dishwasher. He didn’t have a lot of options, but needed a job. Ciara had a feeling that Stefan would have Ben doing some dirty deeds and she was right.

What would you think if your daughter was dating Ben Weston? 🤔 #DAYS pic.twitter.com/1kh9TRI5cQ

“Days of Our Lives” spoilers reveal that Ben and Ciara will call it quits. Their romance has not been an easy one from the beginning. It is a forbidden relationship and everyone is concerned because of Ben’s history. He was the Necktie Killer and very few believe that he has changed.

DOOL Spoilers: Hope Tries To Drive Ben Out Of Town?

The one person who has been the most determined to rip Ben and Ciara apart is Hope Brady. In her mind, she is protecting her daughter. However, she might go too far, especially since she just doesn’t want Ben out of Ciara’s arms, but out of Salem.

Days of Our Lives Spoilers: JJ Confronted About Latest Cover-Up, But Is Haley Worth the Risk?

Fans will have to see how Ben deals with his broken heart. Could it push him over the edge again? Or will he focus on trying to rebuild his life while working at the DiMera mansion. Keep watching the NBC soap to find out what happens next on “DOOL”. Come back to Soap Opera Spy often for the latest “Days of Our Lives” spoilers, updates and news.

Days Of Our Lives (DOOL) Spoilers: Kristen DiMera As Susan Banks Tries To Get Kate…