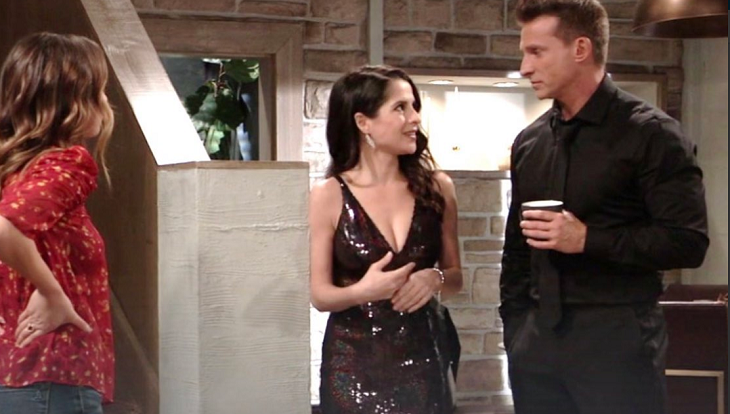 General Hospital (GH) spoilers tease Sam will continue to worry about Kristina’s choice of friends during the week of January 7. Sam (Kelly Monaco) is worried about Kristina (Lexi Ainsworth) and her new supposed friends. Also, Alexis wants to clear the air, Margaux (Elizabeth Hendrickson)  and Jordan (Briana Nicole Henry) exchange notes and Sonny pays Lulu (Emme Rylan) a visit. Here’s what you need to know for the week.

According to Soaps in Depth, Kristina has been hanging out with a new crowd and it’s one that has Sam very worried. Not only has Kristina’s behavior changed in recent weeks, but she has been detaching herself more and more from her family. Also, not only is Sam feeling left out, but Alexis (Nancy Lee Grahn) feels that it’s time to clear the air. But the question is, with whom?

Elsewhere, Margaux and Jordan will meet up to exchange notes. By the Wednesday, January 9, the episode, Sonny (Maurice Benard)  will pay his daughter-in-law Lulu a much-needed visit. Now that Dante (Domonic Zamprogna)  isn’t around, someone needs to keep an eye on Lulu and her family for their own safety. By Thursday, January 10th, Elizabeth (Rebecca Herbst) will be getting some good news her way. Anna (Finola Hughes), meanwhile, is getting a second chance that could change everything.

"I need a doctor!" #GH55 pic.twitter.com/f8JMXIWqnn

GH Spoilers: Is Wes Ready To Repair His Relationship With His Mother?

By the end of the week fans can expect to see Peter (Wes Ramsey) come to his estranged mother’s aid on Friday, January 11th. Does this mean that he’s willing to repair their relationship and hopefully heal old wounds? Perhaps, as this might be a new beginning for them. Of course, viewers will have to tune in to find out what will happen next!

General Hospital airs weekdays on the ABC network. Check your local listings for times. In the meantime, drop us a line with your thoughts in our comments section below. And as always, don’t forget to check back with Hollywood Hiccups for all the latest news, updates and spoilers on General Hospital (GH) and all of your favorite daytime television shows right here!