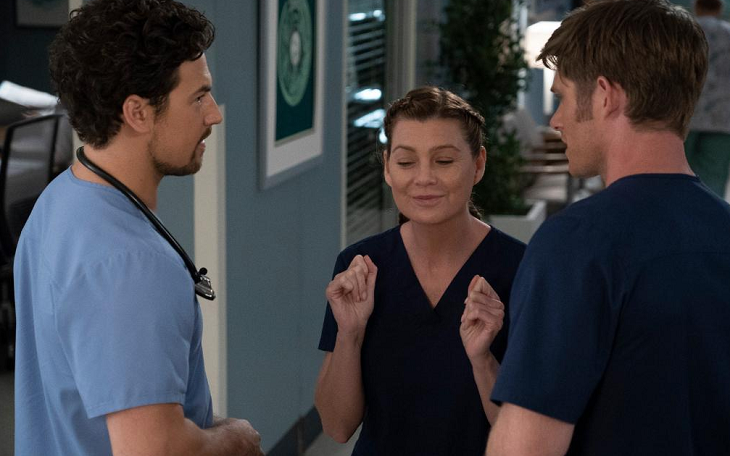 Grey’s Anatomy spoilers tease that when the show picks up again, there will be a love triangle in the works. Meredith Grey (Ellen Pompeo) is ready to find love again and now has several options. The fans of the show have been asking the showrunner to give Meredith a love interest for several years and it looks like the second half of Season 15 will be the time for that to finally happen.

Meredith and DeLuca (Giacomo Giannotti) will get stuck in an elevator together on their way to operate on the matchmaker. It was only minutes after DeLuca told Meredith he had feelings for her. They will have plenty of time to talk about their feelings for each other while maintenance works to get them out of the elevator.

It isn’t clear how Meredith feels about DeLuca. They kissed at Jo and Alex’s wedding, but Meredith insisted that meant nothing. But did it? It’s clear Meredith feels something for the handsome doc. We’ll have to wait to see how it plays out between them.

Grey’s Spoilers: Is Link a Possibility?

Before DeLuca professed his attraction and feelings for Meredith, Link (Chris Carmack) took Grey out drinks. It’s apparent Mer is attracted to Link and he seemed to like her too. Showrunner Krista Vernoff teases that Mer will feel conflicted between the men and have to weigh her options before “going all in” with one of them.

YAY! Get ready for a super-sized Season 15! #GreysAnatomy https://t.co/dGxg9gJalJ

Other Grey’s Anatomy Storylines To Watch!

Richard (James Pickens Jr) is having a tough time. He recently was arrested for destroying a bar. He is struggling with his sobriety and is unaware of his wife’s diagnosis. Catherine (Debbie Allen) has cancer, but he has no clue. He falsely believes she is having an affair with Dr. Koracik (Gregg Henry). Little does Richard know that he and Meredith are working on a breakthrough cancer treatment that will save Catherine’s life.

Teddy told Owen (Kevin McKidd) that she is pregnant with his child. They didn’t have time to talk about it any further as Amelia (Caterina Scorsone) interrupted them in the elevator. Now all three are stuck in the elevator together. Amelia and Owen have been getting along great, so this baby news will surely throw them for a loop.