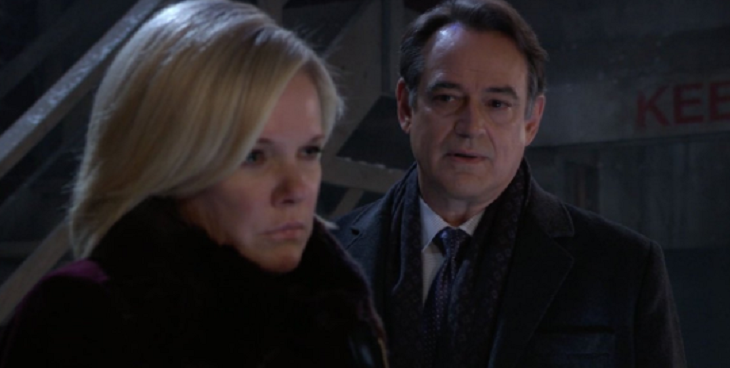 General Hospital (GH) spoilers for Monday, January 14, 2019 reveal a lot of people will be shocked in Port Charles as confrontations and dire warnings are issued. Questions will be asked by loved ones as another is shocked by a proposition. GH fans will not want to miss out on Monday’s episode of the ABC soap opera!

GH sources show PI Curtis Ashford (Donnell Turner) is shocked to learn his dear friend, Nina Reeves (Michelle Stafford) had reunited with Valentin Cassadine (James Patrick Stuart), especially after everything he has done to her; with the lies and secrets. Meanwhile, Dr. Liesl Obrecht (Kathleen Gati) issues a dire warning to her niece, Nina, reminding her that joy will turn to disappointment one day. Will Liesl finally break down and reveal what Valentin is truly hiding from Nina?

Alexis Davis (Nancy Lee Grahn) is very intuitive and meets with her eldest daughter, Sam McCall (Kelly Monaco). She confronts her, wanting to what exactly is happening in the house Kristina Davis Corinthos (Lexi Ainsworth) moved into, that she needs to know about. Will Sam expose what she knows about it and Krissy’s situation?

General Hospital spoilers reveal Carly Corinthos (Laura Wright) walks in on Franco Baldwin (Roger Howarth) while he is ransacking Dr. Kevin Collins (Jon Lindstrom) office. She demands to know why he is doing that.

Griffin's faith is broken and he's not sure if it'll ever go back to the way it was. Tune into an emotional, new #GH – STARTING NOW on ABC! @mattcohen4real pic.twitter.com/1ePs3FYi7w

Jason Morgan (Steve Burton) meets with Port Charles mob boss and his dear friend, Sonny Corinthos (Maurice Benard) questioning him on anything Kristina might have told him about this stranger, Shiloh (Coby Ryan McLaughlin). Sonny has been so occupied with other things going on in his life, how will he handle what Jason might reveal about Kristina’s current situation?

GH’s Ava Jerome (Maura West) continues to struggle and wrestle with the fact that “Kevin” aka Ryan Chamberlain wants her to leave Port Charles with him, immediately. Will she take him up on his offer before his killing streak is exposed?

Be sure to tune into ABC’s General Hospital (GH) on Monday, January 14, 2019 to catch up on everything happening in Port Charles right now. Check Hollywood Hiccups often for updates, news, rumors and spoilers!