General Hospital Spoilers: Will Ava Go On The Run With Kiki’s Killer, Ryan? 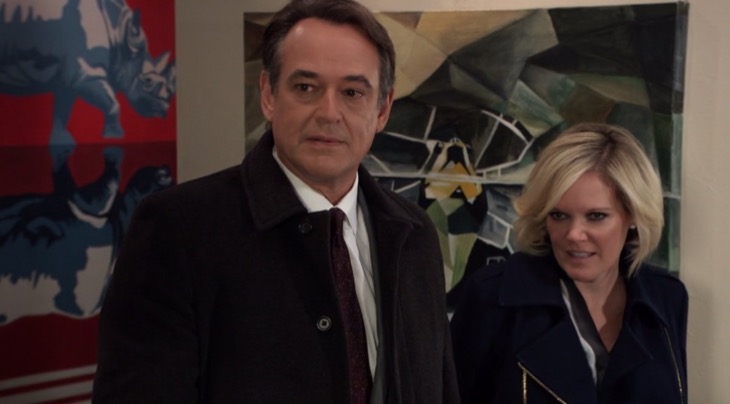 General Hospital spoilers tease that Ava Jerome (Maura West) will consider “Kevin Collins’” (Jon Lindstrom) offer to run away with him and leave Port Charles permanently, but will likely turn him down flat! He’s obviously getting nervous that he and his murder of Ava’s daughter Kiki Jerome (Hayley Erin) will be exposed, and then Ava, in turn, will murder him!

Ryan Chamberlain has never faced this type of threat before; he’s never been involved with a woman seriously in a mutual relationship other than his first wife Gloria, who he killed in Texas, and certainly never a woman so much like himself! Ryan is so narcissistic he perceives Ava as a female version of himself, and so he’s really in love with himself and taking it out on Ava, so to speak!

What he “feels” for Ava even turned him away from a years-long obsession with Felicia Scorpio (Kristina Wagner)! But he knows the dark side of Ava, which he loves, could easily turn against him with fatal results if she ever learns the truth! That is precisely why he wants to take her with him away from Port Charles permanently!

But Ava’s life isn’t only with him; if it were, then she probably wouldn’t have any objections. After all, she almost left town and everything in it just a few weeks ago, and he talked her into staying! But she has gained a new appreciation for the family since losing Kiki, and her brother Julian Jerome (William DeVry) is in Port Charles, her remaining daughter Avery Corinthos (Ava and Grace Scarola) and her art gallery. Franco Baldwin (Roger Howarth) is also in Port Charles, and even though Ava lied to him for many years about Kiki being his daughter, they were lovers many years ago and still close friends…even if Ava has had a funny way of showing it at times!

So will Ava “stand by her man” and will he stay with her even if she won’t leave town with him? Chances are, yes, in spite of Ryan going to more and more extremes to protect his secrets and himself as time goes on! Stay tuned to GH and keep checking General Hospital spoilers frequently to see if Bonnie and Clyde….uh, Ava and Kevin/Ryan…stay together, or if one takes the other down!