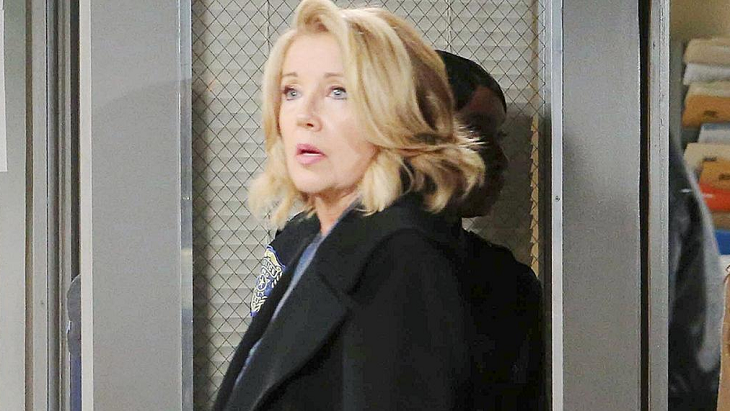 Nikki (Melody Thomas Scott) was shocked on The Young and the Restless. Seeing the fireplace poker she used to hit J.T. (Thad Luckinbill) on the head last April was so astonishing that she divulged something incredible. Nick (Joshua Morrow) learned that his mother was Mr. Hellstrom’s killer!

The multistage climax that’s unfolding on Y&R is riveting and also affords this long storyline proper respect. Rather than have a one-episode arc-ender, former executive producer and head writer Mal Young and his team’s last weeks of episodes are hitting every plot point hard, which is causing a steady reveal drip.

Nick was an interesting character to write into Nikki’s scene. He’s the person who stole J.T.’s identity as part of a scheme to gaslight Victor (Eric Braeden) last year. Morrow’s character didn’t know at the time all that was involved in J.T.’s dark final months. But he does now and that changes the trajectory of this daytime terror tale.

Y&R Spoilers: Who Is Targeting Nikki?

Someone has been targeting Nikki, specifically for months. Her cohorts, Vickie (Amelia Heinle), Phyllis (Gina Tognoni), and Sharon (Sharon Case) are secondary targets. Along with this cloaked pressure, which now includes the placement of the poker at the Ranch fireplace, came the frame of Victor, which has left Nikki alone and seemingly, intentionally isolated.

Refusing to seek the authorities help, Nikki, as part of “Fearsome Foursome”, continues conducting her own freelance investigation. One outcome of that effort saw Tessa (Cait Fairbanks) seemingly neutralized after her blackmail efforts failed. It seems hard to imagine that Miss Porter is actually the ultimate villain, but the possibility does exist.

However, the recently increased danger level for all involved in what happened to J.T. can not be dismissed. Nikki and the others need assistance, which makes Nick’s awareness a potentially positive development. He’s fully on board with keeping Rey (Jordi Vilasuso) at bay, while trying to independently out whoever is tormenting Nikki, Victor, and the others for whatever as yet unknown reason.