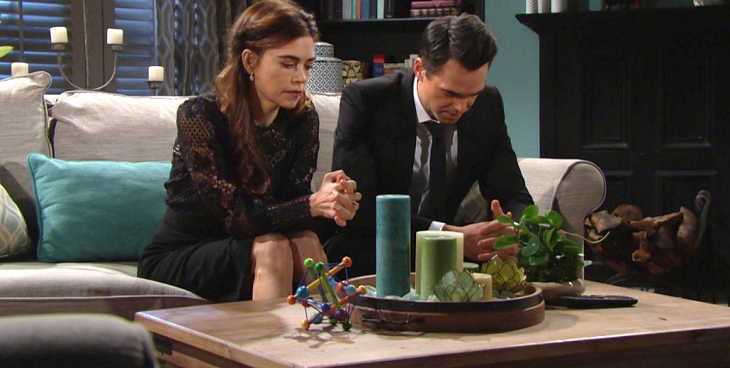 Billy (Jason Thompson) appeared to be in agreement with Vickie (Amelia Heinle) on The Young and the Restless. The potential for a ‘Villy’ reboot exists, but both halves of this fabled couple agreed to take it slow. Then, he walks in on Cane (Daniel Goddard) kissing Vickie in what once was ‘Villy’s’ living room!

Y&R fans are right to question the believability of Vickie and Cane’s seemingly budding romance. Rather than developing chemistry, these scenes feel invented and then pushed as created conflict.

Billy recalls that Brash and Sassy’s own reboot involved romantic overtures between himself and the woman he’s long loved. Cane was an annoyance to him and to Vickie when Jill (Jess Walton) created the three-headed cosmetics monster. In recent months, Vickie’s view of Cane could be accurately described as apathetic.

But Charlie (Noah Alexander Gerry) was written into a scene with Reed (Tristan Lake Leabu) recently, which was rather odd considering Mattie’s (Lexie Stevenson) brother’s pre-existing thoughts about the younger Mr. Hellstrom. Nevertheless, Nikki (Melody Thomas Scott) was hit, Reed and Charlie didn’t know it and drove off.

The above paragraph details the plot point that was woven into the show as the set up where Cane and Vickie’s emotions then collided. While it made sense to have both parents argue about their son’s misguided joy ride, following that with even one kiss was and remains deeply debatable.

However, daytime drama presents stretched reality to its viewers, who understand the game. So, again, Billy walks in on Cane kissing Vickie in what was once ‘Villy’s’ living room. Now what?

Well, Billy is Vickie’s love match, not Goddard’s character. Lily (Christel Khalil) is Cane’s wife, which could mean that Khalil will be seen again in another round of her sporadic, recurring character spots.

Maybe all that’s happening is furthering a ‘Villy’ sequel and is a way to give Cane some storyline to play while his leading lady is away? Y&R’s hardcore fans, along with supporters of both established couples sure hope so.