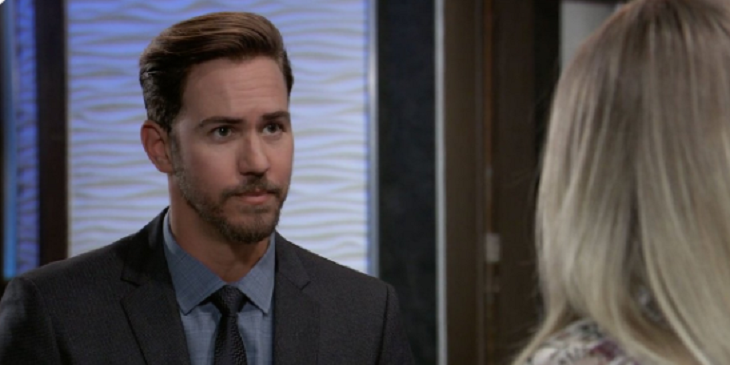 General Hospital (GH) spoilers for Thursday, January 17, 2019 reveal solutions, questions, meetings and favors. It appears several citizens of Port Charles are coping with impending trouble. GH fans will not want to miss out on Thursday’s episode of the ABC soap opera!

GH sources show Valentin Cassadine (James Patrick Stuart) meets with Nina Reeves (Michelle Stafford) who seems concerned; but Valentin assures her that he believes there is way they can fix that. What does Valentin have up his sleeve this time?

Cameron Spencer (William Lipton) runs into Josslyn Jacks (Eden McCoy) and Oscar Nero (Garren Stitt) in the park; when he questions them on what they are doing, Oscar reveals they are planning their future. Will Cam be able to remain quiet that he knows about Oscar’s dire prognosis?

General Hospital spoilers tease that Scott Baldwin (Kin Shriner) and Laura Webber (Genie Francis) are in Alexis Davis’ (Nancy Lee Grahn) office as she is there to read out Gail Baldwin’s (Susan Brown) last will and testament to the two of them.

Ava is ready to leave Port Charles behind, but needs Scott's help to get her affairs in order. Can he convince her otherwise? @kinshriner
Tune into a thrilling, new #GH – STARTING NOW on ABC! @MauraWest #GH55 pic.twitter.com/tdxgqmttAQ

GH Spoilers: Charlotte Is In Trouble

Teacher Willow Tait (Katelyn MacMullen) sits down with Lulu Falconeri (Emme Rylan) feeling it is necessary to have another conference to discuss her and Valentin’s daughter, Charlotte Cassadine’s (Scarlett Fernandez) behavior. Is Charlotte still bullying Aiden Spencer (Jason David) and what will the consequences be for her actions?

Shiloh aka Hank (David Henry Archer) hosts a meeting at his house with Kristina Davis Corinthos (Lexi Ainsworth) and Sam McCall (Kelly Monaco) present. He wants to know if anyone there is willing to share a painful memory.

Laura faces her demons as she prepares to be sworn in as the Mayor of Port Charles! A dramatic, new #GH starts RIGHT NOW on ABC! @GenieFrancis pic.twitter.com/Q2zAj8ozzm

Gh’s Drew Cain (Billy Miller) sits with his brother, Jason Morgan (Steve Burton) asking him if he would be willing to explain the situation to Josslyn Jacks. Will the impending death of Oscar bring the estranged brothers together?

Be sure to tune into ABC’s General Hospital (GH) on Thursday, January 17, 2019 to catch up on all the exciting story lines happening right now in Port Charles. Check Hollywood Hiccups often for updates, news, rumors and spoilers!