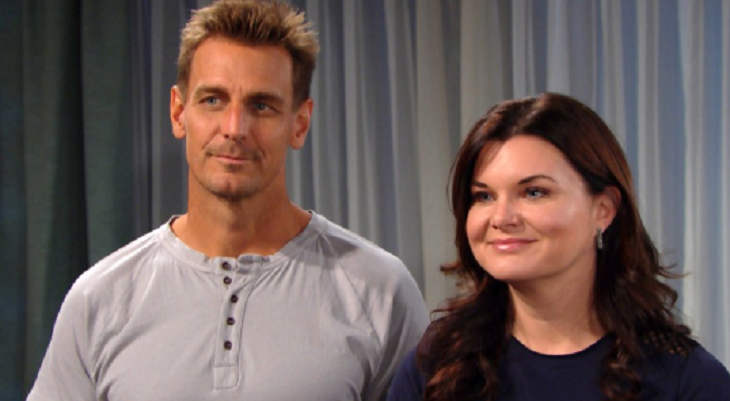 Bold and the Beautiful spoilers for Friday, January 18, tease that Hope Spencer (Annika Noelle) will only feel worse after Sally Spectra (Courtney Hope) tries to give her a puppy as a gift. Wyatt Spencer (Darin Brooks) tried to stop Sally from going into Hope’s room with the puppy, but Sally persisted, and disaster ensued.

Sally hoped that Hope would welcome the puppy and find it to be a source of comfort as she’s grieving for Beth Spencer. However, Hope immediately took offense to Sally’s gesture and assumed that Sally was somehow trying to replace Beth with the puppy. Hope promptly broke down sobbing while Sally stood by, horrified.

Of course, Sally didn’t mean to imply that a puppy could replace baby in Hope’s heart. She was just hoping that the puppy could be a source of comfort for Hope and Liam Spencer (Scott Clifton). On Friday’s episode, perhaps Hope will warm up to the puppy after a little time has passed, or maybe Liam will be more receptive to Sally’s gesture.

Today on #BoldandBeautiful, Sally says she has an idea to help Hope deal with her pain. pic.twitter.com/GU8Op6JcIT

Meanwhile, on the new episode of B&B on Friday, January 18, Katie Forrester (Heather Tom), Bill Spencer (Don Diamont), and Will Spencer (Finnegan George) will enjoy their family time together. Will convinced Katie and Thorne Forrester (Ingo Rademacher) to let Bill stay for dinner, and Thorne will be dismayed by how much Will, Katie, and Bill are bonding.

Of course, this isn’t how Thorne pictured things working out when he and Katie got married. Back then, Bill was hardly a father to Will, and Katie was suing Bill for full custody. Thorne had basically stepped into the role of father to Will, and he probably expected the situation to continue like that indefinitely.

But now, Bill has become a loving and attentive dad to Will, and Thorne will see this up close on Friday’s episode. He’ll also see just how happy Will is with Bill in his life. This will probably leave Thorne wondering whether he’s standing in the way of a happy family being together. Watch for Thorne to start reflecting on how exactly he fits into the picture.

The Bold And The Beautiful Spoilers: Wyatt Worries Liam And Hope ‘s Marriage Is In Trouble, Gives His brother A Warning