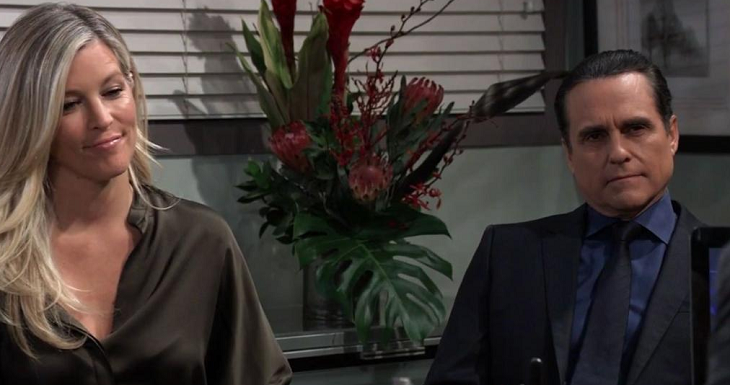 General Hospital (GH) spoilers for Tuesday, January 22 reveal introductions, confrontations and scary moments as loved ones learn of a dangerous situation. Family members attempt to bond, but how will it turn out? GH fans will not want to miss out on Tuesday’s episode of the ABC soap opera!

GH sources tease that Willow Tait (Katelyn MacMullen) arrives at Charlie’s Pub where she spots Michael Corinthos (Chad Duell) holding baby Wiley; he introduces her to his godson. The reason Wiley is at the pub is because Dr. Lucas Jones (Ryan Carnes) and his husband, Brad Cooper (Parry Shen) have brought him to spend some time with his grandfather, Julian Jerome (William deVry). Julian demands to know what is going on, but is that after he spots Willow around the baby?

Alexis Davis (Nancy Lee Grahn) meets with Shiloh (Coby Ryan McLaughlin), saying her only interest is how her daughter, Kristina Davis Corinthos (Lexi Ainsworth) fits into his whole “cult” plan. Shiloh looks concerned by the way Alexis is approaching him.

General Hospital spoilers show Oscar Nero (Garren Stitt) begging Josslyn Jacks (Eden McCoy) to go get them help, as this is the only way they will get out. Will Joss leave Oscar alone after he just had a seizure and how much danger are the teens in? Meanwhile, Sam McCall (Kelly Monaco) and Jason Morgan (Steve Burton) talk about the catacombs; with Sam admitting she knows another way in and is certain Josslyn does too!

Carly Corinthos (Laura Wright) places a phone call, saying that her daughter, Josslyn is in trouble; there are flashing lights around Carly. Did Joss attempt to get out of the catacombs by herself and will they find an ailing Oscar before it is too late?

General Hospital Rumors: Lucy’s Story About Ryan In Her Book Makes Her A Target?

Be sure to tune into ABC’s General Hospital (GH) on Tuesday, January 22 to catch up on all these exciting stories and so much more happening in Port Charles right now. Check Hollywood Hiccups often for updates, news, rumors, and spoilers!