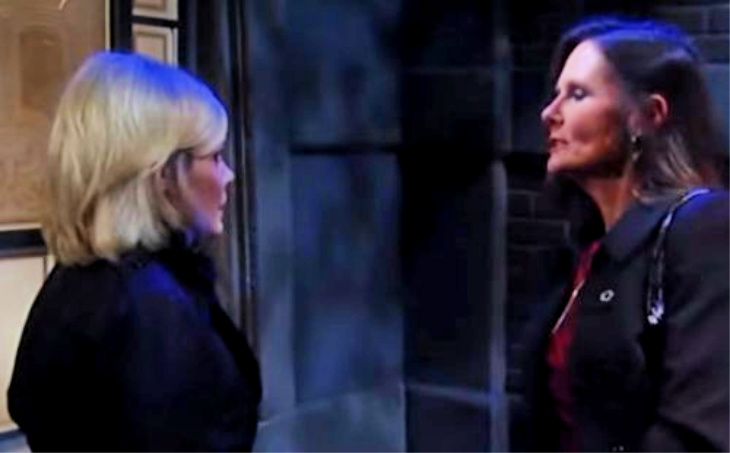 General Hospital spoilers tease that Lucy Coe (Lynn Herring) will blast Ava Jerome (Maura West) about stealing the new mayor’s husband, among other things! She will likely tell her some things about “Kevin” (Jon Lindstrom) that she thinks Ava doesn’t know as well and give her some warnings.

Lucy is one who has known Kevin since he first came to Port Charles, and was even married to him for a while. She also knew Ryan and is probably noticing some very Ryan-like behaviors in her ex, and as Lulu Falconeri (Emme Rylan) also warned Ava, Kevin has not been himself for a while!

Lucy was there when Kevin had a psychotic break and thought he was Ryan, after Ryan’s death, and stalked and kidnapped Felicia Scorpio (Kristina Wagner); Lucy stood by him, and the charges were later dropped, but he lost his medical license for a while. During that time Kevin wrote a book called “General Homicide”, a best-selling murder mystery based on people who worked at General Hospital.

Lucy is ready to unleash her literary debut on the world! But are the people of Port Charles ready for the world to see their dirty laundry? #GH55
Tune into a dramatic, new #GH – STARTING NOW on ABC! @TheLynnHerring pic.twitter.com/hhPAwwpjMW

Unfortunately, a disgruntled former intern named Greg Cooper (David Holcomb) used Kevin’s book as a blueprint for murder. Lulu told Ava about the breakdown but Lucy might go into it more in depth! She may also be concerned, with all the publicity about Ryan (which she herself is contributing to by referring to his crime spree in her book and talking about it at the release party!) that Kevin might again be having a psychotic break and thinking he’s Ryan!

Lucy and Ava getting into a public confrontation should be interesting at the least, possibly explosive, and definitely no-holds-barred! Neither woman pussyfoots around what she is going to say, and both are very outspoken! The only thing that would make it a real free-for-all is if Carly

Corinthos (Laura Wright) were there to join in the fracas! But if Lucy upsets Ava and it gets back to Ryan, Lucy may have unwittingly made herself a target! Stay tuned to GH and keep checking General Hospital spoilers frequently to see what happens next!